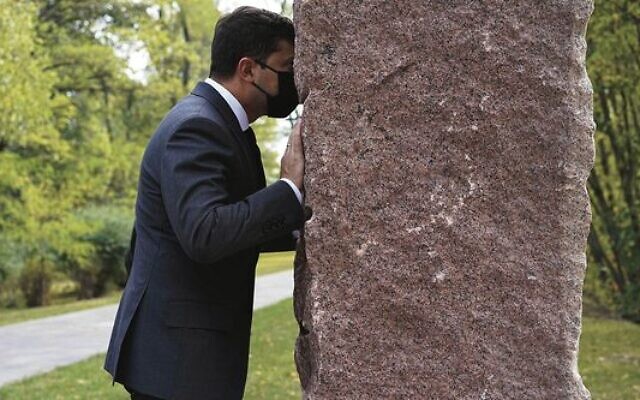 Russian President Vladimir Putin launched his brutal war with a straight face, claiming to be “de-Nazifying” Ukraine. He had the gall to summon, and demand Israel’s ambassador explain, why Israel was “supporting Nazis”.

So, what’s the truth? Many know that Ukraine’s president is Jewish. Less widely known are his Jewish chief of staff and his defence minister. Much of Ukraine’s leadership has Jewish background, including the previous prime minister and current mayor of Kyiv.

Jews serve as mayors of major cities and governors of significant regions. If Ukrainians are contaminated with Nazism like Putin claims, they sure forget at the voting booths.

Some would whitewash Ukraine’s unsavoury past. Antisemitism has deep roots in Ukrainian lands. Much of US Jewry descends from those fleeing Ukrainian pogroms. Ukraine in the 17th century saw the largest modern massacre of Jews until the Holocaust. Kyiv hosted the last major blood libel trial, in the 20th century!

The Nazis were welcomed by a population who had witnessed the slaughter of 100,000 Jews in pogroms just 30 years earlier. Local enthusiasm for killing Jews surprised even the Nazis. Collaborators rounded up thousands of Jews, making the Nazi’s work much easier. About 100,000 Ukrainians joined units helping the Nazis, including the infamous Ivan the Terrible of Treblinka. Ukraine never investigated anyone for Nazi crimes.

Ukraine’s national heroes, from Bandera to Khmelnitsky, are drenched in Jewish blood. These butchers aren’t consigned to history. Today Ukraine celebrates them with statues, parades, street signs and even a bank note. What should Jews make of this?

Recent developments elevate Ukrainian’s image of Jews. Zelensky’s support tops 90 per cent. Golda Meir, who’s earliest memory was her father barricading the door to repel an antisemitic mob, is now celebrated in her native Kyiv as a hero of Ukraine.

Ukrainians and Jews must work through our issues. With Ukraine under threat, now isn’t appropriate to dredge up complex matters without bearing on the conflict.

But it’s Zelensky, married to a Christian and who reportedly had his children baptised, who repeatedly attempts to make this a Jewish issue. His claim to Jewish leaders that Russian bombs damaged the Babyn Yar memorial was revealed to be untrue.

Zelensky demanded to address Yad Vashem. When rebuffed, a Ukrainian official labelled it corrupt. Zelensky did address the Knesset, again comparing Ukraine’s situation to the Holocaust. He urged Israelis to help Ukraine like the Ukrainian nation helped Jews during the Shoah. Unsurprisingly, his Holocaust revisionism wasn’t popular in Israel.

Zelensky’s ‘discovering’ his Jewishness is a recent phenomenon. He’s always downplayed being Jewish. His domestic messaging is very different. At Babyn Yar commemorations, he didn’t mention his own family was murdered there.

This isn’t an attack on Zelensky. He was elected to protect Ukrainian, not Jewish, interests. But he needn’t twist everything into a Jewish issue to receive support. Israel and Jews worldwide have responded tremendously. There’s Israel’s field hospital, prayer rallies, and reportedly Israel’s largest-ever aid operation.

Israel will take more refugees per capita than any country not bordering Ukraine, including hosting tens of thousands of non-Jewish Ukrainians. Israel helps, not because the war is a Jewish issue, but because it’s the right thing to do.

Zelensky should understand that Israel faces its own existential struggle. Biden’s pending nuclear deal with the Ayatollahs hangs over its head. Has Zelensky ever expressed concern over the threat to Israel from a nuclear Iran?

While Russia points fingers over Ukraine’s blemished history, it needn’t look far. True, pogroms largely occurred in Ukraine and were fewer in Russia proper. The reason though – Russia banned Jews for most of its history. Antisemitism has equally rich heritage in Russia, from the KGB to the Protocols of the Elders of Zion. Whether under the Tsars or Stalin, Jews faced horrific persecution.

If Putin is concerned about Nazis, he needn’t look further than his allies, who threaten to annihilate the Jewish State. Putin himself bears not insignificant responsibility for Iran’s nuclear program.

Both Ukraine and Russia have come a long way. Statistics show neither are amongst the worst offenders regarding antisemitism. Jews are far likelier to be victims of antisemitic attacks in the streets of Paris or London than Moscow or Kyiv.

Jews must resist Putin and Zelensky’s efforts to make this a ‘Jewish War’. The images from Ukraine are devastating. We must oppose unjustified aggression and war crimes, but as a matter of principle, not because of how either country treated us.

Robert Gregory is director of public affairs for the Australian Jewish Association.