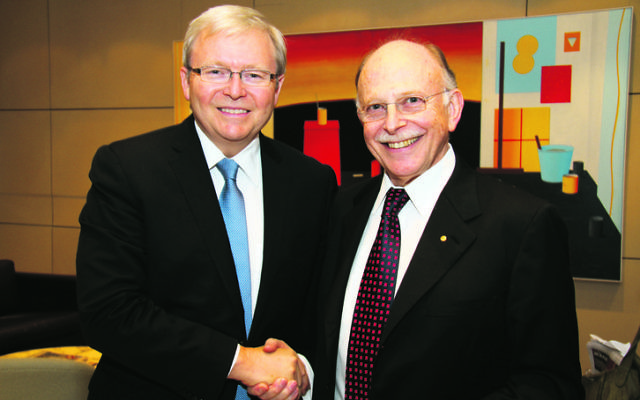 Rudd’s recollections of the June 2010 encounter – from his forthcoming book The PM Years – were published by Fairfax last Friday.

He alleged that during a dinner with Jewish leaders after Mossad agents had been found to have used forged Australian passports in the assassination of a Hamas weapons chief in Dubai, Leibler “went off his head” and “berated me for having committed such a hostile act”, in expelling an Israeli diplomat.

Rudd said Leibler replied “I don’t believe you,” when told Mossad had forged passports in 2003 and went on to threaten, “Julia [Gillard] is looking very good in the public eye these days, Prime Minister. She’s performing very strongly. She’s a great friend of Israel. But you shouldn’t be anxious about her, should you, Prime Minister?”

Leibler said he was “surprised and shocked” at Rudd’s version of events.

“I have consulted both my contemporaneous notes and my memory … the account of that meeting in the published story is completely false, virtually from top to bottom,” the lawyer and AIJAC chairman said.

“The threatening quote attributed to me about Julia Gillard in the article, used to imply that I or some mythical pro-Israel conspiracy somehow had a role in Gillard’s success in overthrowing Rudd, is a complete and total fabrication.”

He said he privately assured Rudd that he shared his concerns about the misuse of passports and would express those concerns to the Israeli government, “which I did in fact do”.

Rudd tweeted last Friday in response to Leibler’s account, “4 uncomfortable truths for Liebler [sic]. 1) Mossad forged Australian passports for use in an assassination in Dubai. 2) They had done the same before. 3) On advice, & to protect Oz passports, I expelled Mossad from Canberra. 4) Liebler [sic] attacked me for doing so.”

Leibler pointed out to The AJN that the tweet “does not address the core issue of controversy at the moment – the fact that his book apparently contains fabrications about the June 3, 2010 meeting, asserting a version of events that simply did not occur”.

“It is telling that Rudd does not attempt to reassert the false claims quoted from his book in his tweet,” he said.

“I find it sad that Rudd appears to now feel the need to rewrite the historical record .to both misrepresent our respectful disagreement and paint it as part of some sort of conspiracy against him.”