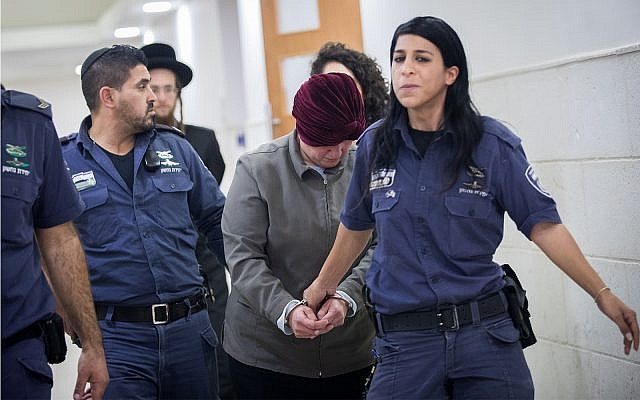 LAWYERS for alleged child sexual abuser Malka Leifer on Wednesday filed an appeal to the Supreme Court over a May ruling that found she was mentally fit to stand trial for extradition.

The appeal also seeks to immediately stop the extradition case against her, which is due to be held in the Jerusalem District Court on July 20.

Israeli media reports Leifer’s lawyers cited a court decision in 2016 to halt all legal proceedings against her due to medical opinions claiming Leifer suffered from mental illness and was unfit to stand trial.

They also stated that despite the opinion of a psychiatric panel deeming Leifer was feigning her mental illness, she has been receiving antipsychotic drug treatment that could adversely affect her health.

“Of course, every defendant is entitled to due process, so we will anxiously await the outcome of this process,” Waks said.

“However, based on the evidence, and as someone who has followed this case very closely, I expect this appeal to be promptly overturned, and for Leifer to be extradited to Australia in the near future.”

Victoria Police is seeking to extradite Leifer to face 74 charges of sexual abuse against students at the Adass Israel School, where she was  principal.

Federal Member for Macnamara Josh Burns told The AJN on Thursday morning the appeal was “disappointing but not surprising”.

“Malka Leifer has a well-resourced legal team who have managed to delay this case through 66 court hearings. They are entitled to appeal but this cannot be an excuse to delay the extradition hearing finally slated for July 20,” Burns said.

“Dassi Erlich, Nicole Meyer and Elly Sapper have been waiting for justice for far too long. It’s time for Malka Leifer to face justice in Australia.”

Zionist Federation of Australia president Jeremy Leibler was disappointed at the decision to appeal.

“For a time, Leifer successfully hoodwinked the state into thinking she was mentally unfit to stand trial, so of course she was administered medication in line with the diagnosis her legal team sought.

“By attempting to sue the state for doing so, they’ve highlighted the falsity of their previous claims.”

He added, “As the courageous Dassi Erlich has noted, Leifer’s lawyers are claiming she is fit to stand trial in a civil suit, but not in an extradition trial. It is shameful.”

These three courageous sisters – Elly Sapper, Dassi Erlich and Nicole Meyer – fronted the media this morning after their alleged abuser Malka Leifer was found mentally fit to face an extradition trial. "I hope that this moment will show all those survivors across the world that they too have a voice and give them the encouragement to speak out," they said. #BringLeiferBackRead more: https://www.australianjewishnews.com/leifer-found-mentally-fit-to-stand-trial/