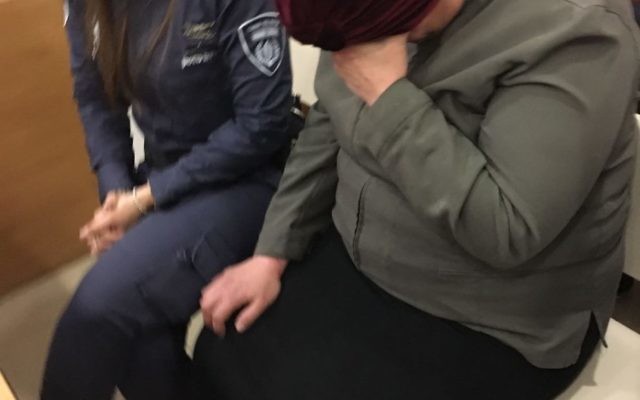 MALKA Leifer will be held in a secure psychiatric facility where a district psychiatrist will be assessing her over the coming week, before her next court date on February 21, a judge ruled at her second court hearing on Wednesday.

Leifer finally faced an Israeli judge on Tuesday, after police officers claimed that she was faking mental illness to avoid court proceedings.

The 54-year-old sat slumped in a chair in the dock of a central Israel court, hiding her face with her hands, throughout her two hearings.

The first took place a day after police rearrested her, saying they had new evidence suggesting that claims she is mentally unfit to face trial are bogus.

During the hearing at Petah Tikva Magistrates Court, details started to become clear about how Israeli police suddenly transformed Australia’s demand for Leifer’s extradition from a seemingly hopeless case to a realistic request that could well be fulfilled in the coming months.

An investigator approached the judge with an open laptop loaded with a memory stick, and showed him what looked like Leifer going about normal day-to-day activities.

The discussion that ensued suggested that several videos are part of a “secret” file on Leifer, which police and state prosecutors claim undermine her claims about her mental health.

The dramatic revelation of police surveillance means that Leifer is now facing not one but two legal processes in Israel.

The extradition attempt is now up and running again, and she is facing a parallel case for “suspected offences of obstructing court proceedings under aggravated circumstances in the fabrication of evidence and impersonation.”

Leifer’s lawyer, Yehuda Fried, told The AJN that he believes this second case against his client “will evaporate in the air”, without indictments.

In court, Fried did not dispute the reliability of the videos or claim that his client hasn’t been going about certain day-to-day activities.

But he insisted that the evidence doesn’t prove that she is stable, because what counts is her state of mind when court proceedings loom, and “every hearing” brings a degeneration in her mental health.

Responding to questions for this article, Fried said, “I assume that every mentally ill person can have normal functioning. In a stressful situation, one probably does not have the normal coping powers.”

When it comes to his suspect, “who suffers from PTSD, things are even worse in a court hearing”.

Alleged victims and their supporters poured scorn on the defence’s claim.

“It’s strange that anyone could argue that such serious matters be dropped simply because an individual has some form of mental or emotional attacks when they are due to face the prospect of many years in prison,” anti-abuse activist Manny Waks told The AJN.

“Most people would react negatively to this. She belongs either in Australia or in a medical facility until she can travel to Australia.”

Israel Police spokesman Micky Rosenfeld discussed the case in detail with The AJN on Monday, shortly after the arrest.

“Her claims that she couldn’t stand for trial were lies and she used that in front of the court to prevent herself being taken back to Melbourne,” he said.

Rosenfeld added that contrasting her claims “police evidence showed a different picture altogether – that the psychological issues which prevented her from standing trail that she had claimed were incorrect and inaccurate”.

As The AJN went to press, all indications were that the rearrest and the first of what is expected to be a string of court hearings will jump-start extradition proceedings.

The process has not moved forward since it began in August 2014, as a result of Leifer’s claims about her state of mind.

The judge on Tuesday agreed to a request by police to keep Leifer in detention until the next scheduled hearing.

Fried bombarded the court with questions and claims, including a suggestion that the latest developments have come about as a result of Australian pressure on Israel.

Israeli authorities have not mentioned diplomatic pressures in relation to the latest developments in the case.

Rather, in their statement they credited Interpol, the international policing association, spurring the investigation forwards.

They also revealed that during the investigation “a variety of complex and sophisticated actions were carried out that required the use of advanced technological means”.

The arrest and court appearance is a glimmer of hope for Leifer’s accusers who, just two weeks ago, were crestfallen that she was given a reprieve from proceedings for the third time.

An Israeli judge had given her a reprieve from court for another six months, ruling out extradition hearings until June.