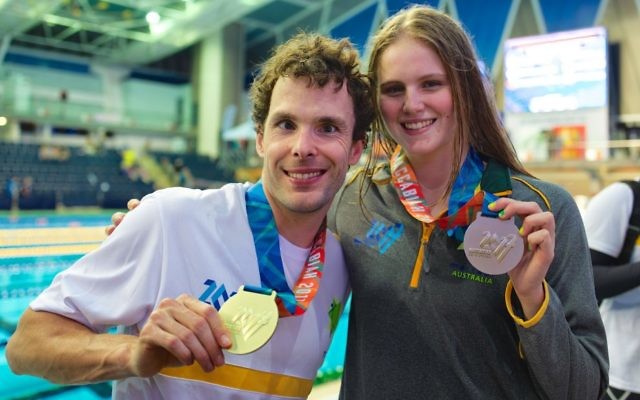 THE swimming finals kicked off in the best way possible for the Australian team at the Maccabiah Games, with two-time Paralympic gold medallist Matt Levy now adding the title of three-time Maccabiah gold medallist to his résumé.

Not only did he win the para men’s 100m freestyle final on July 9 with a time of 1:02, he went on to win the 200m freestyle on July 10, becoming the first person in Maccabiah history to break a world record.

His third gold medal came from the 50m backstroke final.

“It’s always good to do PBs [personal bests] in a meet like this,” Levy enthused. “It was a pretty unreal experience and I had a pretty good swim. It’s always hard to back up from the night before … but it was good that my race plan worked.”

Levy, who has cerebral palsy and a vision impairment, was inspired to swim for his country when Australia hosted the Olympic and Paralympic Games in 2000, saying: “I saw many swimmers competing in events with far worse disabilities than my own and I developed a burning desire to join them at the next Paralympics.”

“Representing your country on the world stage is very exciting,” said Levy. “It’s always great to race internationally … People involved in Maccabiah are really passionate about what they do and it’s great to be a part of it.”

Following the Maccabiah Games, Levy will contest the international swimming championships in Mexico later this year, before aiming for the Commonwealth Games on the Gold Coast in 2018.

Also medalling for Australia was junior swimmer Ashley Weill, who was placed second in both the 100m and 200m backstroke. Weill is following in the footsteps of her grandfather Asher, who competed in 1957 and again in 1997, where he won gold in masters backstroke. Now aged 81, he will represent Australia again this year in the same event.

“Never had I ever thought that I would be competing at the same competition as my 81-year-old grandad,” Ashley told The AJN ahead of the games.

“I think the fact that he is competing is truly amazing and inspirational and what makes it even better is that I will be there right next to him.”

In all three races, the Aussies finished in third place behind the USA and Israeli teams.