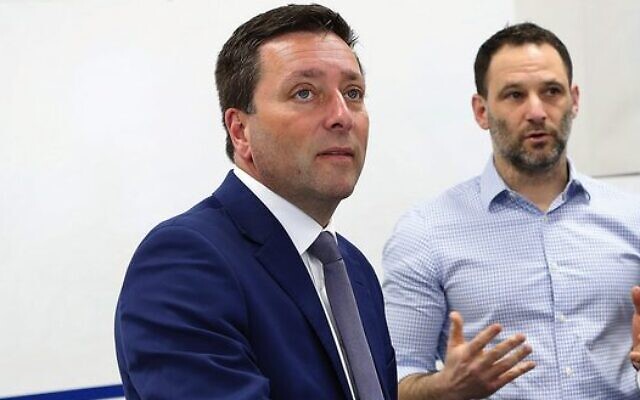 IN an exclusive interview with The AJN, Victorian Liberal leader Matthew Guy committed himself to maintaining and upgrading security at Jewish schools, shules and community centres, noting deputy leader and Caulfield MP David Southwick has pledged $600,000 in funding to the Community Security Group.

And he emphasised that the bipartisan ban on publicly displaying Nazi swastikas – due to begin next month – “came through David’s leadership in the Parliament”.

Asked if a Coalition state government would amend the Equal Opportunity Act to allow schools to discriminate in hiring staff, Guy said the law needs to be changed. “We don’t support any form of discrimination … what we’re saying for faith-based schools is that if you wish to employ people who are in keeping with your school’s faith, then [you] should have that ability to do that.

“The Labor government’s view is that religious education should be one class, two or three times a week, by a religious-education teacher, and then the rest of the school is fair game for whoever teaches there. I don’t agree. I think that a faith-based education is for all of the school.” He was emphatic that sacking any LGBTQI+ teacher would remain an offence.

Strongly endorsing a letter by Southwick to the Andrews government, urging it to work with Victorian universities to adopt the IHRA antisemitism definition, Guy reiterated that Victoria’s tertiary campuses should be free of antisemitism and BDS. “I’ve seen material online which is pretty distressing and disturbing, coming through universities … blatantly antisemitic under the guise of being anti-Israel.”

With fears another COVID wave is imminent, how would a Guy government handle a resurgence? “You can expect us to upgrade the hospital system so that there are no more lockdowns and no more mandates … I would be making sure there were better hospitals, not more restrictions.”