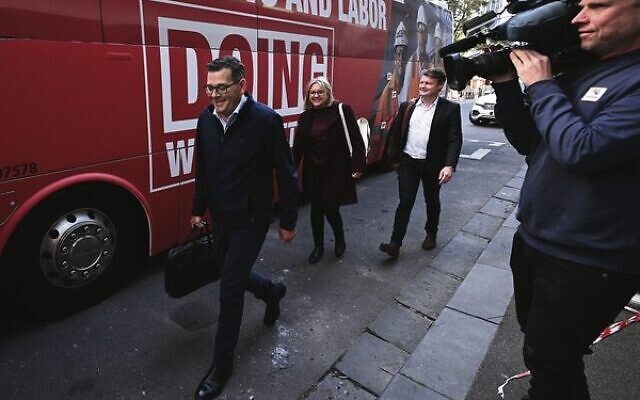 PREMIER Daniel Andrews and his deputy Jacinta Allan have become mired in an election-week war of words with the Liberals about whether extremist candidates should be labelled “Nazis”.

Allan said at the weekend that the Liberals are “preferencing Nazis” on how-to-vote cards. The Premier added in a tweet, “Nazis, racists and bigots have no place in politics.”

The claims focused on several candidates, including Tylere Baker-Pearce, an independent running for Narre Warren South, who has posted antisemitic material, including a smiling selfie in front of the Auschwitz memorial site. But while Burns had tweeted about the Liberals preferencing Baker-Pearce, Labor was also shown to have preferenced him.

Separately, Timothy Dragan, Liberal candidate for Narre Warren North, apologised after being captured on audio saying Australia should not recognise First Nations, nuclear waste should be dumped in Alice Springs and he would vote for an abortion ban.

Telling the Premier to “put up or shut up”, Southwick condemned Labor’s claims as “baseless, disgusting and vile”, adding Allan “was unable to identify a specific example of a so-called ‘Nazi’ that we are preferencing”.