Ten rockets hit Kharkov on Friday morning, not far from the Russian border, but that didn’t stop the Jews in Kharkov from celebrating Chanukah!

Large menorahs were placed in three big shopping malls that were bombed and shelled during the war. Another menorah stands outside the Barabashova market that rockets hit numerous times. Another menorah is shining brightly on Sumskaya street just a few meters from the Governors Building on the main square that was destroyed on the first days of the strikes on Kharkov.

And this year, for the first time in the subway station that was a bombshelter for tens of thousands in the hardest months of intensive shelling in the city. Now around the menorah in the subway there is dancing, doughnuts and menorahs being given out. The menorah shines underground as a symbol of light, hope and miracles. 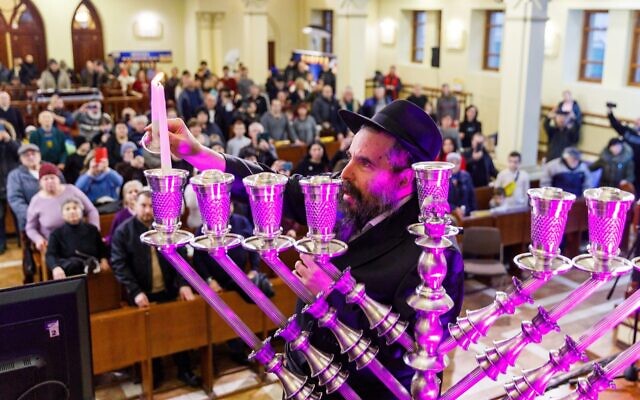 On the first night of Chanukah, over 500 people streamed into the synagogue on Pushkinskaya St to celebrate. The scene of the synagogue packed with children playing dreidel and laughing, men putting on tefillin and everyone enjoying doughnuts and a concert of Jewish music made it hard to believe there is a war going on outside.

Rabbi Moshe Moskovitz, Chief Rabbi and Chabad emissary in Kharkov shared the Lubavitcher Rebbe’s message to the crowd saying, “Now when we are surrounded by so much darkness and difficulties we need to light up the world with goodness. Each and every one of us doing one more good deed will dispel the darkness.”

Mr Igor Terechov, the mayor of Kharkov, joined for the lighting on the third night of Chanukah. Emotionally he said, “In homes throughout Kharkov the Chanukah candles are being lit giving us all hope. Light always wins over darkness! I wish us all that next Chanukah we will celebrate in peace in Kharkov!”

The Jewish community distributed thousands of food packages, blankets and heaters, and Chanukah packages to homes throughout the city.

This year when there is no electricity in the city and in many homes the Chanukah menorah is the only light in their house, the Jews in Kharkov are praying together with all of Ukraine that there should be miracles now, “in those days, in these times”.