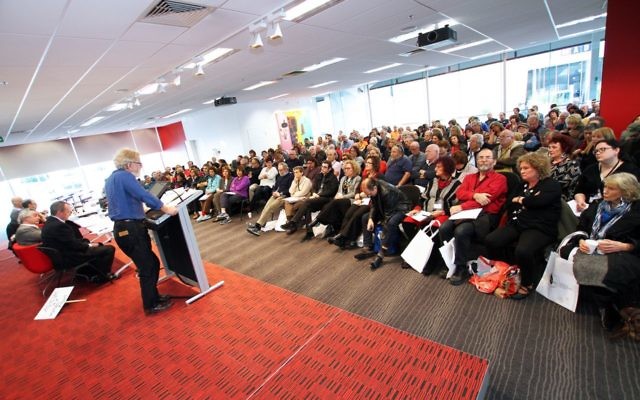 EXCITEMENT is building with a month to go until Limmud-Oz, the program promising “something for everyone whatever their interest”, according to volunteer co-chair Angela Zinn.

Based on the international model and alternating between Melbourne and Sydney each year, this year the popular festival of Jewish ideas will take place in Sydney on June 6-8. The recently-released program boasts some 200 sessions to be presented by a variety of local and international minds.

For this, the ninth Limmud-Oz in Sydney, international presenters will include Israeli talmudist Gila Fine, Middle East analyst and academic Nir Boms, Holocaust scholar Anita Grosmann and Professor Mohammed Dajani, a peace activist who famously took a group of Palestinian students to Auschwitz.

“Limmud offers people an opportunity to engage with issues that not only concern Israel, but concern our community,” Zinn said, noting domestic violence, child sexual abuse in light of the recent Commission, intermarriage and Jewish education among the issues on the table.

Along with the intellectual discussions, Zinn said there will be plenty to keep participants entertained between sessions.

“This year we’re having a greater focus on the social elements of Limmud,” she explained. “Everyone understands that Limmud-Oz is intense; people are rushing from session to session. We’re trying to focus on the experience of participants between the sessions.”

“Movie Track” is one example, where participants will be able to view selected films and then hear from the directors.

She enthused that the registration so far has been terrific, with interest from people interstate too. In addition, they have been “inundated” with presenter registrations.

“It shows how important this platform is for the community,” Zinn said.

There is still time to book, and Zinn encouraged people to register as volunteers for the event, which means a 50 per cent discount off the original ticket price in exchange for a couple of hours of assistance each day during the festival. “Limmud is a volunteer-run event. They create and execute the event. They are invaluable to making the program run,” Zinn said.

“[Limmud is] an opportunity to be more informed, to meet other people, and engage with issues you haven’t necessarily engaged with in the past,” she said, adding: “More than anything, it’s a fun experience.”

For more information and to book, go to www.encounters.edu.au/Limmud.