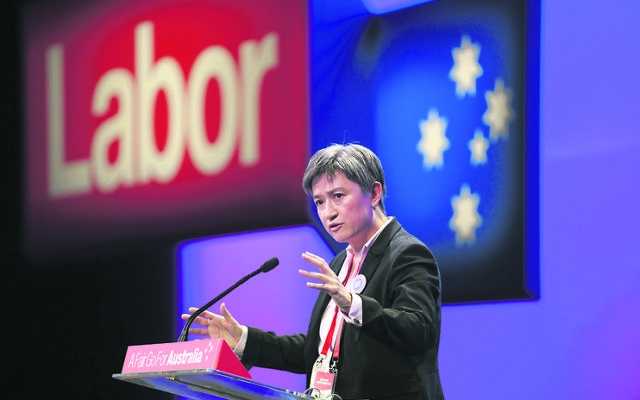 SEVENTY years of Australian bipartisan agreement on Israel are over. On Tuesday, four days after Prime Minister Scott Morrison announced that Australia now recognises West Jerusalem as Israel’s capital, the Australian Labor Party – which says it will reverse that recognition in government – passed a resolution to recognise Palestine as a state.

In addition to recognising only West Jerusalem as Israel’s capital, Morrison said on Saturday that Australia’s embassy will remain in Tel Aviv until a peace deal is reached.
Opposition foreign affairs spokesperson Penny Wong tweeted in response, “Labor does not support unilateral recognition of Jerusalem as the capital of Israel and in Government would reverse this decision.”

Moving the resolution to recognise Palestine at Labor’s federal conference on Tuesday, Wong said Morrison’s decision was “made against the longstanding advice of agencies, without Cabinet consideration, and without properly consulting Australia’s partners and allies”.

The Labor resolution “calls on the next Labor government to recognise Palestine as a state” but is non-binding.

Similar to a 2016 NSW Labor resolution, it “supports the recognition and right of Israel and Palestine to exist as two states within secure and recognised borders”.

It further expects “this issue will be an important priority for the next Labor government”.

Stating Labor was a friend to both Israel and the Palestinians, Wong said “the hallmark of Labor’s approach” had been even-handedness and acceptance of the “legitimate claims by both parties”.

Jewish Labor MP Mark Dreyfus told The AJN the “deep and lasting friendship” between Labor and Israel “will never change”.

“This resolution strongly affirms both Israel and a future state of Palestine’s right to exist within secure borders,” he said.

The Executive Council of Australian Jewry (ECAJ), while noting the resolution would not be binding on a Labor government, said unilateral recognition of Palestine could only act as a disincentive to resuming negotiations.

“The resolution overlooks the reality that no Palestinian entity presently exists which meets even the most minimal of the legal and practical criteria for statehood – a government capable of exercising control over its people and territory, and delivering on international agreements,” president Anton Block and co-CEOs Peter Wertheim and Alex Ryvchin said in a statement.

Australia/Israel & Jewish Affairs Council director of international affairs Jeremy Jones noted there had never been a “State of Palestine” and there was no existing entity which could “logically be recognised”.

Quoting Wong, who said of the government’s West Jerusalem announcement that “a final status issue … should be resolved as part of any peace negotiations”, Jones said, “Recognition of a Palestinian state is the quintessential final status issue.”

Zionist Federation of Australia president Jeremy Leibler, who called the resolution “disappointing”, noted with appreciation “the efforts made by senior Opposition MPs and the Australia Israel Labor Dialogue in the lead up to the conference”.