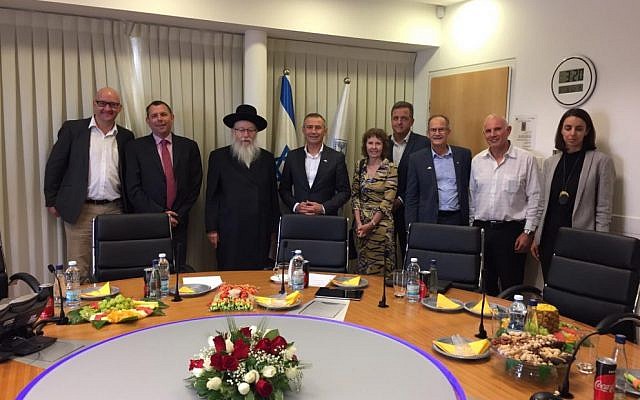 “Litzman is currently under police investigation for interfering in the Malka Leifer case – he is accused of pressuring medical experts to try to prevent Leifer from being extradited to Australia to face 74 charges of child rape and sexual assault against several of her former students,” he said.

“This is an affront to Leifer’s alleged victims … Litzman should have been forced to stand down, at least until the police investigation against him has concluded,” stated Waks. “At the very least, no Australian official should be legitimising Litzman.”

As well as his alleged interference in the Leifer case, claims also emerged this month that Litzman has helped protect a number of convicted sex offenders.

Waks wrote to Cook, urging him to apologise, but the WA Deputy Premier’s spokesperson stated his itinerary was arranged by the Australian Embassy in Israel, the Australia–Israel Chamber of Commerce (AICC) and the WA Department of Jobs, Tourism, Science and Innovation.

Stating Cook was “unaware of the allegations … prior to arriving in Jerusalem for that meeting”, the spokesperson said, “Whilst the current court proceedings are a matter for the Israeli justice system, Minister Cook would never wish to cause pain or suffering to any alleged victims of child sex abuse.”

Describing the meeting as “surprising and disappointing”, Nicole Meyer, one of Leifer’s alleged victims, said, “We are waiting every single day since 2011 for Malka Leifer to be extradited back to Australia and to see this meeting occur is deeply hurtful.”

The Israel-based IACC is “profoundly sorry for facilitating the meeting with Litzman”, its executive director Paul Israel said, and the organisation “sincerely apologises to the victims, their families and supporters for causing any hurt and pain”.

Leon Kempler, chair of the AICC, told The AJN his organisation “stands by the statements” made by the IACC and Cook.

After the IACC’s apology, Waks stated, “While it is most regrettable that this meeting took place in the first place, the Chamber’s response to the outrage and hurt is most welcome – they have taken full responsibility for this debacle.”