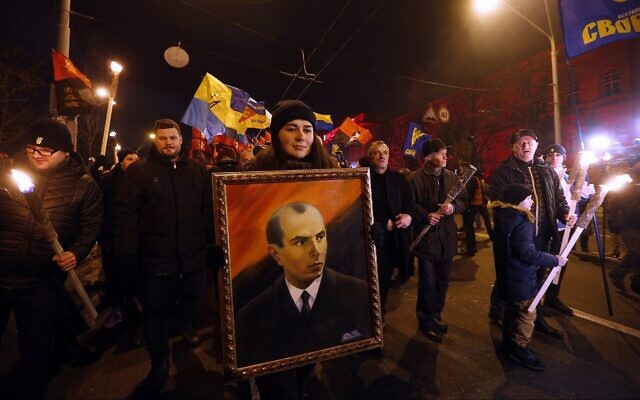 Nationalist activists carry flags, torches and a portrait of Stepan Bandera during a rally marking his birthday in Kiev in January 2019. Photo: AP Photo/Efrem Lukatsky

AS a Christian of Ukrainian heritage, I am well aware that I begin from a position of the disadvantage when writing for a Jewish publication.

A long sordid history of antisemitism casts an understandable pall over Jewish attitudes toward Ukraine and Ukrainians. From the 17th century pogroms of Khmelnytsky rebellion to collaboration with Nazi genocide during the 20th, the annals of Ukraine are filled with unconscionable crimes that Jews have not forgotten.

I believe it’s important for the Australian Jewish community to know that the vast majority of the Australian Ukrainian community looks back in horror at the crimes committed in that other place at that other time. And for this reason, I write to call out a small smattering of Ukrainian Banderites whose size and influence are inversely proportional to their volume.

And the indisputable facts are that Bandera was a mass murderer who was motivated by ethnic bigotry against Jews, Poles and anyone else who didn’t meet his arbitrary definition of who was a ‘genuine’ Ukrainian.

The 10th OUN commandment instructed its members to “expand the strength, fame, wealth and area of the Ukrainian state, even through the enslavement of foreigners”.

And Bandera in particular, would routinely cloak his murderous antisemitism under the facade of his struggle against Soviet communism.

Never mind that Jews never constituted more than five per cent of the Soviet leadership. Or that Marxism is an atheist creed that views Judaism – and all other religious faiths – with contempt.

The myth of Jewish Bolshevism was nothing more than a convenient antisemitic shibboleth that Bandera abused to justify his murderous antipathy towards Jews. With calamitous consequences once the Wehrmacht and SS Einsatzgruppen marched into Ukraine during Operation Barbarossa.

On June 30, 1941, Bandera issued a ‘declaration’ of Ukrainian Independence, delivered by his henchman, Yaroslav Stetsko, which pledged allegiance to Hitler and the new Nazi order in Europe. This ‘declaration’ is still rejected as legally and morally invalid by most Ukrainians today.

In early July 1941, less than a fortnight into the German invasion, OUN militiamen, armed and organised by the Wehrmacht, conducted murderous pogroms in Lviv that claimed 5000 innocent Jewish lives. The SS archives in Berlin contained a report from Ukraine that quoted a slogan being used by OUN activists during the summer of 1941. “Long live Ukraine without Jews” … and “Jews to the gallows”. The OUN assisted the Nazis in murdering hundreds of thousands of Jews in the ‘Holocaust of Bullets’ all over Ukraine.

The Ukrainian Insurgent Army (UPA) – OUN’s military wing, led by Roman Shukhevych – slaughtered over 100,000 ethnic Poles in the Volhynia region during the northern summer of 1943.

OUN soldiers, who formed the Waffen SS Galizien Divisions, were directly involved in the violent suppression and liquidation of the Warsaw Ghetto, hand in hand with the Nazis in 1943.

All of these abhorrent crimes against humanity, and more, fall directly at the feet of Bandera, Melnyk and the OUN.

But to conflate the Nazi collaboration of a relatively small number of Ukrainian fascists with the desire of the vast majority of non-fascists including Ukrainian Jewry for Ukrainian national self-determination, freedom and democracy is a huge mistake. As we have learned from worldwide academic consensus (Andreas Umland, Timothy Snyder, John Paul Himka, David Marples and others), such an error plays directly into the hands of the OUN and their extremist, antisemitic allies today.

Today the OUN and their fellow travellers in Ukraine and Australia make more noise than their minuscule electoral support justifies.

In Ukraine today, the vast majority oppose the ‘heroisation’ of the OUN.

May 9 is the date where Ukrainians celebrate the victory over Nazism in Europe.

I want the Australian Jewish community to know that on this date, the Australian Ukrainian Congress and the vast majority of Ukrainians here and in Ukraine, will be standing in solidarity with all of the victims of the Nazis and their collaborators, especially world Jewry, as we pledge “Never Again!”

Andrew Olexander is a member of the Presidium of the Australian Ukrainian Congress.