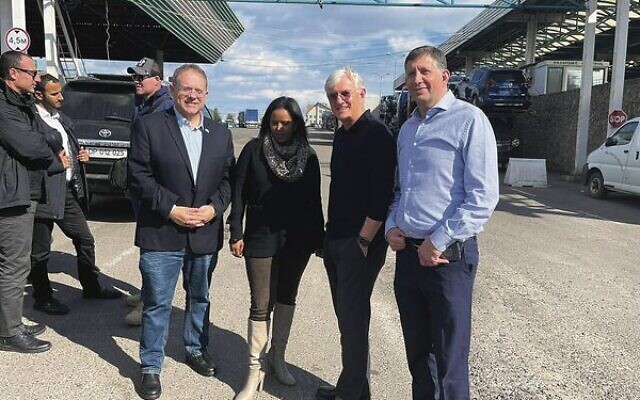 Steven Lowy visited Poland and Ukraine as part of a Keren Hayesod-UIA mission.

STEVEN Lowy left war-torn Ukraine earlier this month with a changed perspective, but also with immense pride in Israel for the humanitarian aid it continues to provide for fleeing refugees.

Lowy, chairman of Keren Hayesod-UIA Board of Trustees, and his wife Judy travelled to Poland and crossed the border into Ukraine to visit Israel’s civilian field hospital, where volunteers work around the clock to treat Jewish and non-Jewish Ukrainians caught up in the war. He told The AJN it was a confronting experience.

“They’re all volunteering their time on two-week stints and they actually could have filled the volunteers three times over,” he said.

“More than 60 per cent of them were refugees themselves. They made aliyah when they were children, so they speak Russian or Ukrainian, and they just want to go back to help.

“You cannot help but be phenomenally proud of Israel to see that. There’s a program offered by the Jewish Agency and Keren Hayesod where, at 15, children from the former Soviet Union could come to Israel in advance of their parents. One of the doctors we spoke to was on that program – she was brought out as a 15-year-old and now she’s returned as a doctor to help.”

Lowy also visited a dilapidated mall in Poland that is being used as a refugee centre. It’s full of elderly people and mothers with children and an entire floor full of stretcher beds.

“The ultimate image we should have is immense pride in what Jewish people around the world are doing, not only for Jewish refugees, but general assistance in a massive humanitarian crisis.”

But Lowy said there are conflicting emotions on the ground given Ukraine and Poland’s poor history with the Jews during the Holocaust.

“One doctor was very historically conflicted because on that site, the site where the Israeli civilian field hospital is, apparently 2000 Jews were slaughtered during the Holocaust,” he said.

“But they put all that in the past and they just felt like for today, they needed to go back and help.”

The Holocaust comparisons were impossible to ignore. Back in Poland, in the refugee centre, Lowy found a room full of shoes donated to the refugees.

The connotation, Lowy said, was, “You’ve seen the shoes the Nazis took in Yad Vashem. Now we’re giving shoes – it’s just so poignant and such a powerful image.”

In the past six weeks alone Israel has taken in 9000 Ukrainian refugees and has processed thousands more aliyah applications every day. During his visit, Lowy saw off another group who were lucky enough to make safe passage to Israel after fulfilling the Law of Return.

Lowy said it’s a timely reminder of the importance of Israel to the Jewish world.

“If you were a Ukrainian 80 years ago, you were murdered for being Jewish,” he said.

“Today if you are a Ukrainian you would want to be Jewish, because someone is going to come and get you and bring you home.”