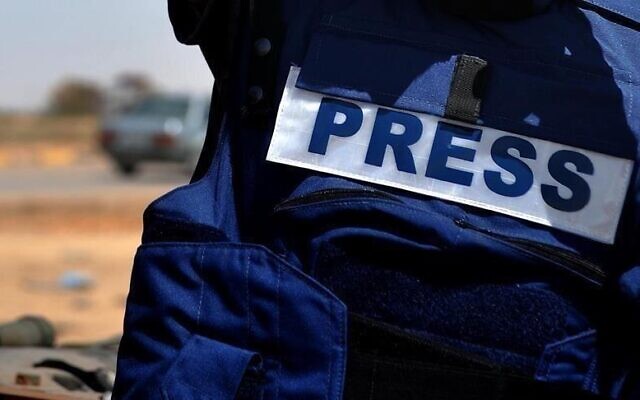 IN democratic Australia, individuals and groups are free to debate media content, and to criticise and complain as they see fit.

Without offering a single persuasive example, Lyons asserts that Jewish organisations, especially the Australia/Israel & Jewish Affairs Council (AIJAC), who call out factual errors or problematic media coverage, “prevent a free flow of information” and stop the media reporting the truth about Israel.

In fact, the media are so intimidated by AIJAC and “accusation[s] of antisemitism” they self-censor, he says – yet provides no example of AIJAC or any other significant pro-Israel group labelling media reports antisemitic.

Moreover, the Israeli–Palestinian conflict is much more extensively covered in the Australian media than any comparable conflict, with critical coverage and commentary on Israel widespread. Lyons pretends the opposite is the case.

Thus, on ABC Radio National last week, Lyons said there was “barely a mention” in Australian media of the April Human Rights Watch report – which Lyons wholeheartedly endorses – that scurrilously and untruthfully accused Israel of having crossed the threshold into apartheid. (There is a similar claim in the booklet).

In reality, SBS TV, The Age and Sydney Morning Herald print editions and multiple websites, including The Guardian Australia, as well as news.com.au and its many subsidiaries – The Australian, Herald Sun, Daily Telegraph etc – all covered it.

Lyons, it seems, has never forgiven AIJAC for criticising his reporting as The Australian‘s Middle East correspondent from 2009 to 2015 – when he frequently relied on sources highly critical of Israel; failed to explain the justification for Israeli security measures; and reported Palestinian allegations of mistreatment without adequate Israeli responses.

This booklet offers more of the same. It ignores the Palestinian terrorist campaign of 2000-2005, when more than 1000 Israelis were murdered; Israel’s three far-ranging offers of Palestinian statehood, rejected by Palestinian leaders; Israel’s 2005 withdrawal from Gaza; and Hamas’s rule over Gaza since 2007 and ongoing commitment to Israel’s destruction.

This tendency recalls the atrocious Four Corners episode Lyons co-produced in 2014 called “Stone Cold Justice” that focused on the fact Palestinians in the West Bank are under military justice, while Israeli settlers are covered by the Israeli justice system.

Lyons refuses to acknowledge, either in the booklet or elsewhere, his critics’ central point – that he repeatedly failed to inform his audiences that international law compels Israel to apply military law, not Israeli law, to the West Bank.

Lyons consistently responds to valid criticism by ignoring its substance and insisting being criticised equates to being “targeted”. Critics are smeared as “far right” and pro-settlements.

AIJAC is “aligned to the far right of Israeli politics”, he falsely asserts, offering no credible evidence whatsoever.

Of course, AIJAC actually advocates the views of Australia’s mainstream Jewish community, and is unaffiliated with any Israeli political group. We have consistently hosted politicians and journalists from across the Israeli spectrum, including numerous Israeli Labour party figures, and have not been inhibited from criticising Israeli government policies.

Lyons dismisses AIJAC’s consistent and unequivocal support for a two-state resolution, sneering, “in my view this is purely lip-service … If they genuinely wanted a two-state solution they would push not just for an end to new settlements but for the winding back of existing settlements.”

Yet no Zionist party in Israel demands the immediate dismantling of settlements. Apparently, for AIJAC to not be “far right”, it must be more radical than any left-wing Israeli Zionist party.

Lyons absurdly paints AIJAC as having “unadulterated power” – more power than former prime ministers or any other Australian lobby group. Apparently, we outgun the ACTU, the Business Council of Australia, GetUp, and the National Farmers’ Federation.

He is so eager to denounce AIJAC, he violates journalism’s basic principles.

To substantiate his wild claim about AIJAC’s supposed power, Lyons selectively quotes from, and completely misrepresents an innocuous email AIJAC executive director Dr Colin Rubenstein sent to two editors of The Australian newspaper who had attended an off the record media briefing with visiting Israeli PM Benjamin Netanyahu in 2017.

Similarly, Lyons selectively quotes from Rubenstein’s speech at a rally during the 2014 Israel-Hamas war; “Israel does more than any other country to avoid killing civilians.” Lyons omits what followed – Rubenstein listing IDF measures to avoid civilian casualties, “phone calls, texts, leaflets and the knock on the roof to warn civilians, even if that means it loses some military advantage”.

Instead, Lyons’ writes, “Rubenstein had said that a foreign army conducted itself with higher moral standards than the army of the country of which he was a citizen,” adding numerous “leaders of Australia’s Jewish community have echoed the same view”.

But Rubenstein never said anything of the sort. It is insidiously implied that Rubenstein and other Jewish leaders have a greater emotional loyalty to Israel than their own country.

All this raises serious questions about the propriety of a senior ABC News and Current Affairs executive essentially seeking to delegitimise the activities of one segment of Australian society – especially on the basis of factual errors, misrepresentations and blatant misuse of sources (too many for this article to address).

These questions are compounded by the booklet’s effective endorsement of the May 2021 “DobetteronPalestine” petition which called on journalists covering Israeli-Palestinian issues to avoid “both siderism” and prioritise the Palestinian perspective – demands completely incompatible with the ABC’s editorial obligations.

Despite Lyons’ browbeating and factual distortions, designed to prevent us exposing one-sided, distorted or historically illiterate media coverage wherever it may come from, AIJAC will continue to do so and offer constructive criticism, as is our democratic right. All we ask of media reporters, editors and decision-makers is that they consider any such criticisms on their merits as they would with any other community group.

There should be no place in a democratic multicultural Australia for Lyons’ contention that one sort of community group – Jewish pro-Israel ones – are too dangerous to have their voices heard and considered.

Dr Tzvi Fleischer is editor of the Australia/Israel Review, published by AIJAC. Allon Lee is a senior policy analyst at AIJAC.