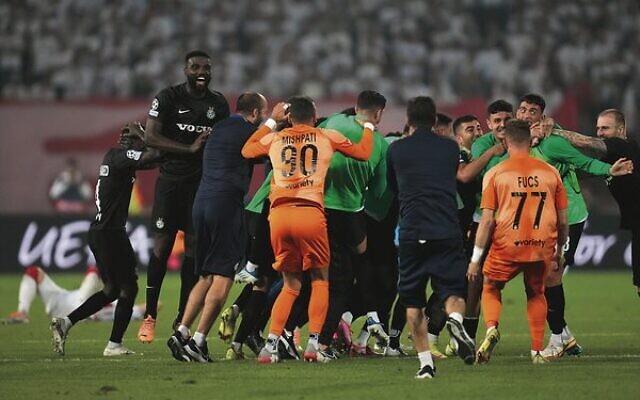 ISRAELI club Maccabi Haifa FC have qualified for the UEFA Champions League group stage for the first time in 12 years, after beating Red Star Belgrade 5-4 on aggregate in their two-game series that concluded on August 23.

In dramatic style, a 90th-minute own goal by the Serbian side’s Milan Pakvok resulted in a 2-2 draw in the second match in Belgrade, after Maccabi Haifa had won the first leg 3-2 at home earlier that week.

The win means Maccabi Haifa will join 31 other teams in European football’s biggest annual competition, where it will face off against top-flight squads from across the continent.

It will be the team’s third-ever appearance in the group stage, and the first for an Israeli side since Maccabi Tel Aviv made it in 2015.

Maccabi Haifa – whose bench includes former Socceroo Nikita Rukavytsya – found itself in a hole early against home squad Red Star after a goal by forward Alexander Pesic in the 27th minute.

Fifteen minutes later, Red Star midfielder Mirko Ivanic sent a shot into the top of the net to put Red Star in the driver’s seat 2-0.

Maccabi would not wait long to come roaring back. With the first half in stoppage time, Haifa’s Dolev Haziza’s penalty shot was blocked by Red Star goalie Milan Borjan.

However, the Israelis regained possession, and seconds later, defender Daniel Sundgren sent a curveball past a diving Borjan to give Maccabi its first score.

With a scoreless second half coming to a close, and the teams headed for a tie on aggregate, Omer Atzili’s corner kick flew in the direction of Pakvok, who awkwardly tried to deflect the ball, and instead sent it sailing into his own net.

Politicians and others rushed to heap praise on the Haifa squad following the win.

The team was mobbed by ecstatic supporters on returning to Israel the next day, with hundreds of the club’s fans waiting to greet the players upon landing at Ben Gurion Airport.

“You’ve brought great pride to all Israelis,” Prime Minister Yair Lapid said in a congratulatory message to the team.

“We’ll be crossing our fingers for you in the Champions League.”

They’ll likely need all the luck they can get. No Israeli team has ever made it past the group stage, and of all the participating teams, Maccabi Haifa is ranked lowest.

On August 26 at the official draw for the tournament, Maccabi Haifa was placed in group H, which includes French powerhouse club Paris Saint-Germain, Italian giant Juventus, and Portuguese side Benfica.

Each team plays the others in its group, at home and away, and the top two teams in each group then advance to the knockout stage.

UEFA will announce a fixtures schedule by this Sunday.

The Champions League group stage starts earlier than usual, on September 6, and will end on November 2, due to the Football Men’s World Cup in Qatar starting on November 20.