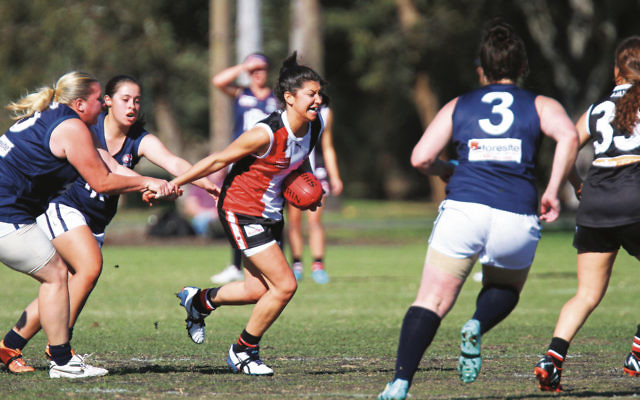 Maccabi Victoria named football player Toni Hamilton (pictured with the ball) the most Outstanding Maccabi Sportswoman of the Year for 2015. Photo: Peter Haskin.

Mizrachi, who was also named as the outstanding Maccabi sportsman of the year, is the Oceania Para Table Tennis champion in class 6-10 singles and has qualified to represent Australia at the Rio Paralympics later this year.

She was also accepted into the AFL’s academy program and is in line to play in the inaugural AFL women’s competition next year.

Race walker Jemima Montag, a member of Australia’s track and field team, took out the both the Maccabi and Jewish junior sportswoman of the year awards, while swimmer Dante Negri won the Maccabi junior sportsman and cyclist Riley Hart the Jewish award.

Clive Aaron from the Maccabi Swimming Club was named the administrator of the year, and David Zivin – an assistant team manager at the last four junior carnivals, as well as a committee member at the junior cricket and football clubs – received the president’s award.

“The quality of this year’s award winners are outstanding and reflects the incredible talent in our community. Our athletes are competing at state and national level and winning medals,” Dorfman said.

“We can be very proud of all winners and nominees. The Henry Jolson Pathways Program, which starts this year, will ensure that our clubs will provide an environment where members can reach their full potential.”

Maccabi also used the event at the Blake Street shul to recognise its club presidents and a select group of volunteers.