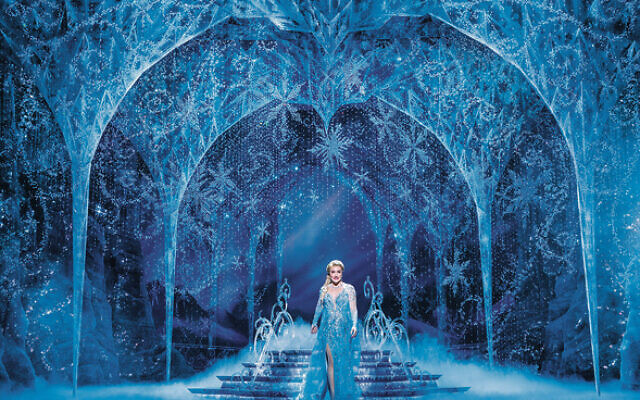 It was a challenge for actress Jemma Rix to make such an iconic role as Elsa in Frozen her own, considering Jewish Hollywood star Idina Menzel’s impact in the original 2013 animated film which grossed more than $1 billion at the box office.

Frozen, which bills itself as the hit Broadway musical, premiered at Her Majesty’s Theatre last week after its opening was postponed from mid-June due to COVID restrictions, and proved a triumph for Rix and all the magical stage effects.

While Harry Potter and the Cursed Child set the gold standard for stage effects, Frozen is filled with stunning effects that graphically illustrate Elsa’s magical powers.

Thanks to the success of the movie, Frozen has become a children’s favourite, but its humour and theme of sisterly love gives adults plenty to enjoy.

The show is set in the fantasy land of Arendelle where Princess Elsa is kept isolated in the royal castle to prevent her from harming her sister Anna and others with her magical powers.

While the sets and costumes are spectacular, there are fine performances by Rix (well known for starring roles in Wicked, The Wizard of Oz and Evita), newcomer Courtney Monsma as Anna, Thomas McGuane as handsome villain Hans and Matt Lee as the puppeteer for Olaf.

Frozen is directed by Michael Grandage while the creative team includes former Jewish dancer Leanne Cherny as the casting director.

Frozen is at Her Majesty’s Theatre. Tickets: frozenthemusical.com.au