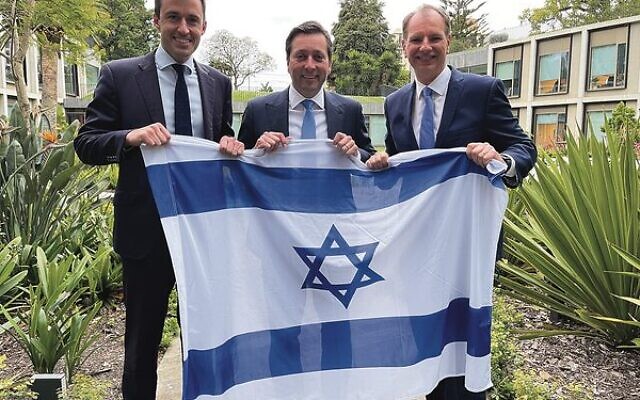 STATE opposition leader Matthew Guy has announced that the Victorian Liberals will adopt the International Holocaust Remembrance Alliance’s (IHRA) working definition of antisemitism should they be successful at the next election.

At Zionism Victoria’s (ZV) 83rd annual assembly on Tuesday night, Guy, recognising a rise in antisemitism in the community, said it “risks being normalised if not defined and called out. We’ve got to get onto this very, very quickly”.

The Liberal leader called the adoption a “vital step to tackle antisemitism in our schools, communities and online so that everyone in our multicultural community can live free of hate.”

Deputy Leader of the Liberal Party and member for Caulfield David Southwick, who also announced the Victorian Liberal Nationals’ policy commitment and campaign to ban the Nazi swastika in February 2020, said, “The best way to stop hate is to educate,” calling the adoption “an important step to take action against antisemitism”.

In thanking Guy for his announcement, Zionism Victoria president Yossi Goldfarb said, “People in Victoria can be reassured that their right to identify with our Jewish and Zionist community is proactively supported by both major parties in Victoria.”

Noting that the “Australian adoption of the IHRA definition was achieved with bipartisan consensus,” president of the Zionist Federation of Australia Jeremy Leibler called on Premier Daniel Andrews to also consider adopting the definition, labelling it “the global standard”.

The meeting marked Guy’s first engagement with the Jewish community since being re-elected as the leader of the Victorian opposition in September and saw him restate his overwhelming support for Israel.

“You have a lot of friends out there,” he said. “Israel is one of our mates.”

The night also recognised the tireless work of ZV honorary treasurer Greg Blashki, who took home the ZV Community Volunteer of the Year award for his outstanding contribution to many community organisations, including 27 years at the United Israel Appeal.

Shay Felber, vice president of the Aliyah and Absorption Unit in the Jewish Agency (JA) also spoke, excited to share that despite the pandemic, the number of people making aliyah is growing.

He also announced that the JA is developing an app to connect those looking to make aliyah with experts in Israel who will be able to answer questions via their digital platform.

ZV leadership also farewelled chairman of the Beth Weizmann Community Centre Sam Tatarka and executive director Jean Katzen, who are stepping down from their roles.