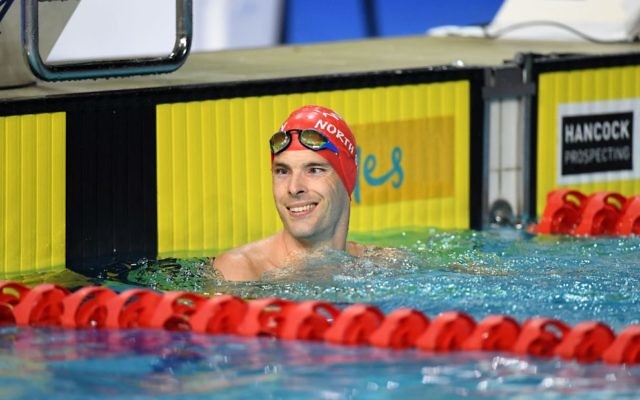 North Sydney Paralympian Matthew Levy, who has cerebral palsy and vision impairment, led the way with a gold on day one in the men’s multi-class 50 free in 29.71 seconds, and earned another gold in the men’s para 400 free after touching the wall in 5:00.27.

The 32-year-old finished the championships by winning bronze in the men’s 200 IM multi-class final in 2:43.03, edged by fellow Paralympians Tim Hodge (1st) and Liam Schluter.

An upbeat Levy said at this early time of the year, his results were “a good gauge to see how everything is progressing” just three weeks away from the nationals.

In the men’s 100 freestyle up against the likes of Kyle Chalmers, James Roberts and Cameron McEvoy, Negri qualified for the A final, finishing in 51.06 seconds to come seventh overall, 0.01 in front of Olympian Thomas Fraser-Holmes.

He also made B finals in the 50 free and the 200 free, winning the latter to come 11th overall.

Ravenswood’s Kyron Israelsohn scored three PBs and made two B finals. The 22-year-old came 15th overall in the 50 free in 23.69 seconds, and beat his seed time again in the 50 fly B final to come 19th overall in 26.07 seconds.

There were many highlights too in the women’s events.

Ravenswood Swim Club’s Eliyah Malkin, who is only 15, enjoyed the most thrilling of moments when she was part of her club’s four-woman team that won gold in the 4x100m freestyle relay.

Malkin also swam in six individual events, her best result being 30th in the women’s 50 free.

There were more PBs for Jewish swimmers in the women’s 50 backstroke, with 19-year-olds NSW’s Ariella Levy (KRB Aquatics) and Victoria’s Isabella Smorgon (MLC) beating their seed times in the heats. They both did so again in the B final, with Levy posting 34.06 seconds to finish second (12th overall) and Smorgon 34.57 to come seventh (17th overall).