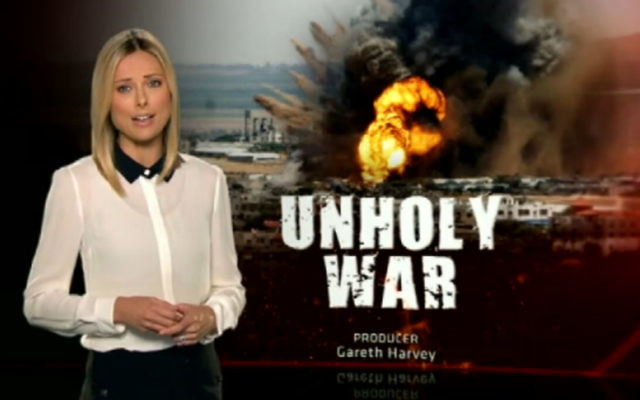 Almost 2000 killed in just 10 days. No, not a statement regarding the current conflict in Gaza but the latest statistic to emerge from Syria, a country whose bloody civil war has raged for more than three years.

Two thousand in just 10 days. And the world barely flickers an eyelid. But why would it when it can focus on its favourite bete noire, the State of Israel?

Focus, though, is perhaps the wrong word. Because for those of us who seek objectivity and balance in reporting on the Jewish State, reading Mike Carlton’s Fairfax column on Saturday or watching Allison Langdon’s 60 Minutes report on Sunday, showed just how out of focus and blurred our media’s coverage of Operation Protective Edge can become.

Little wonder that in the hours that followed publication of the former and broadcast of the latter, Facebook feeds were filled with furious posts from members of the community countering the claims made, seeking to set the record straight, placing the conflict in context and introducing basic facts that seem to have been overlooked by the respective journalists in favour of regurgitating the all-too-familiar and all-too-easy “Israel is the all-powerful, immoral aggressor” line.

To highlight their case, the pundits posit what is widely portrayed as the IDF’s disproportionate response to the meagre rockets fired by Hamas. Ironically, in so doing they ignore the media’s disproportionate focus on Israel – remember the almost 2000 Syrians killed in just 10 days – and their own disproportionate allocation of blame on Israel.

Did either Langdon or Carlton mention Hamas’s stated commitment to the destruction of Israel, the terrorist atrocities and rocket attacks that predate this current conflict and have precipitated every conflict in recent years including this one?

Did they mention the 2005 disengagement from Gaza and various proposals of a West Bank withdrawal that could and should have laid the foundations for a two-state solution – if that is what the Palestinian leadership genuinely wanted?

Did they mention Israel’s documented attempts to minimise civilian casualties as opposed to Hamas’s documented use of human shields?

The answer is a simple no.

But it is pretty much what we’ve come to expect.

For its part, 60 Minutes was textbook, Israel-baiting by numbers. Chapter one: Having interviewed members of a Palestinian family who’ve suffered at the hands of Israeli aggression, why interview an Israeli family that’s suffered from Palestinian terrorism for balance, when instead you can interview a couple of right-wing settlers with extremist views to show how bigoted Israelis are? For good measure, throw in another Israeli interviewee – a left-winger – who’ll confirm that the system is rotten to the core. One final note, don’t even consider interviewing a Palestinian who calls for Israel’s destruction, because then it might seem the country actually has something to worry about … and that the ones we’re depicting as oppressed aren’t quite the innocents we want them to appear.

As for Carlton’s column, that was altogether more insidious. Not only were we treated to baseless accusations of “genocide” and “ethnic cleansing” on Israel’s part, but then there was a subtle shift. These were crimes being committed by “a people with a proud liberal tradition of scholarship and culture, who hold the Warsaw Ghetto and the six million dead of the Holocaust at the centre of their race memory”.

This column was no longer about a country, this was about a people and a race – a people and a race who should know better because of what they themselves went through. In short, you Jews are the same as the Nazis, worse perhaps because you choose to ignore the lessons of your own history.

How low can a columnist in a mainstream newspaper sink?

How low can a mainstream newspaper sink?

And then, to illustrate the point, a cartoon featuring a big-nosed, bespectacled Jew, the kind that would have featured in Der Sturmer, wearing a kippah and with a Star of David scrawled on the back of his armchair – just in case it wasn’t quite clear he was Jewish – pressing a remote control that detonates an explosion in Gaza.

Two weeks ago, a Jewish man was beaten up in Melbourne, last weekend a Jewish school in Perth had the words “Zionist scum” daubed on the wall. Across Europe, synagogues have been attacked, Jewish-owned shops have been vandalised and pro-Palestinian rallies have echoed to chants of “Gas the Jews”.

And how does our own media respond? First, by fuelling the fire of anti-Israel sentiment through unbalanced and misleading reporting, and second, by fanning the flames of anti-Semitism – flames whose heat we are already lamentably feeling on these shores.

In these troubled times, it behoves our media to act both responsibly and with integrity, not to stir the pot.

Shame on 60 Minutes. Even greater shame on Fairfax.

If you haven’t done so already, consider cancelling your Fairfax subscriptions today.

A screen grab from the 60 Minutes report.