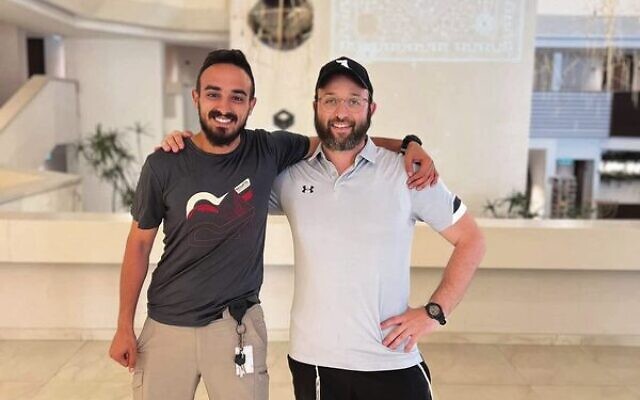 Yahya Mahamid (left) with Rabbi Daniel Rabin at their meeting in Jerusalem.

Rabbi Daniel Rabin of Caulfield Shule recently returned from a trip to Israel, during which he met up with Israeli-Arab Zionist Yahya Mahamid.

Rabbi Rabin told The AJN about the meeting in Jerusalem, “We discussed all things Israel, Zionism and Australia.”

Mahamid works in Israel as a speaker, educator and activist. He also serves as a mentor in various programs and works to empower, and integrate youth from Israel’s Arab minority into society. Raised in the city of Um Al Fahm which is located in the Haifa district of Israel, he grew up with a negative image of Israel and the Jewish people, due to having been misinformed about the Arab-Israeli conflict.

After meeting Israeli Jews, he chose to volunteer as a combat infantry soldier in the IDF and had since dedicated himself to educating others about antisemitism and misinformation about Israel.

“It was wonderful to meet Yahya in person and to discuss current issues in Israel, as well as the advocacy work he is doing in the region,” Rabbi Rabin said.

“We recalled the Zoom talk he gave during the lockdown period and how well received it was by all those who attended virtually. My plan is to host Yahya in Australia for a visit and to work on making that happen.”

The two have spoken previously during Melbourne lockdown on a Zoom chat that was open to the public.

Mahamid said, “Rabbi Rabin and I met last year, when we collaborated on organising a speaking engagement for the congregation he leads, it was an amazing, engaging event.

“I was very moved by the rabbi and his wise view on Judaism and his kindness.

“This was the first virtual event for me in Australia and I have since been looking forward to engaging with the Jewish Australian community as I have heard wonderful news about the community from my brother in arms Justin Fulop, a fellow lone soldier.

“We served together in the Nachal infantry brigade. It was really great to meet with Rabbi Rabin in Israel on his recent trip and to discuss many topics.

“I am looking forward to more involvement with the Jewish Australian community.”

Rabbi Rabin said that the two spoke about a possible visit to Australia for Mahamid and explained that plans are underway to make that happen.