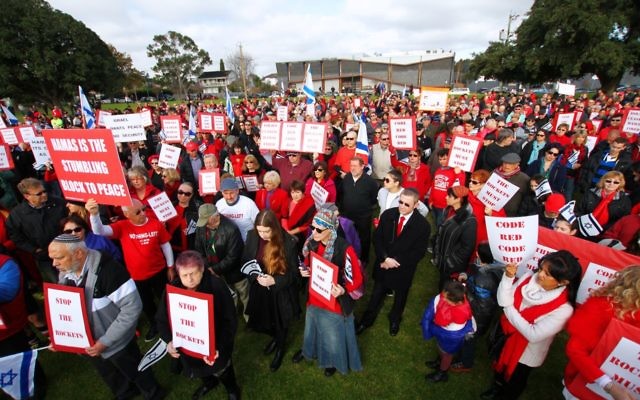 FROM a sea of almost 2000 protesters at a community rally for Israel, Maya Zipman, a diminutive Melbourne grandmother, stepped forward, holding a piece of paper, on which she had written a prayer for her grandson, an Israeli soldier currently in Gaza. In a quavering voice, she asked Zionist Council of Victoria president Sam Tatarka to read it out, which he did.

“To all the Jewish boys who stand up tall, protecting native land and the right to live … spread protection over each young man,” intoned the heartfelt prayer.

It was a poignant moment in a peaceful rally at Princes Park in Caulfield South on Sunday at which the Jewish community gathered to protest the continuing barrage of rocket fire into Israeli cities that triggered the latest campaign in Gaza.

Clad in red to symbolise Code Red, the warning that gives people 15 seconds to find shelter, protesters held aloft placards with messages such as “The rockets must stop”, “Hamas is the stumbling block to peace” and “Hamas uses its civilians as human shields”.

Describing the rocket attacks as “unrelenting”, Tatarka also read a message from Israeli ambassador Shmuel Ben-Shmuel, who was attending a similar rally at Central Synagogue in Sydney: “The government of Israel has been forced to defend itself from further acts of terror. Operation Protective Edge will continue until it reaches its goal, restoring quiet to Israel’s citizens for a prolonged period, while inflicting a significant blow to the infrastructure of Hamas and the other terrorist organisations that threaten our state from Gaza.”

Liberal Senator Scott Ryan, who addressed a rally during Israel’s 2012 Gaza campaign, said: “The Australian government stands with you”, adding that media coverage of the war “does not reflect the daily fear that people in southern Israel have to cope with”.

State Labor MP Marsha Thomson and Liberal MP David Southwick, co-chairs of the Victorian Parliamentary Friends of Israel, (VPFI) addressed the rally, Thomson stating: “Israel has an absolute right to defend its citizens and we would expect nothing less of our government in the same circumstances”.

Southwick compared the rally with pro-Hamas demonstrations locally and overseas, saying of the latter, “these are not peaceful protests”.

Jewish Community Council of Victoria president Nina Bassat panned anti-Israel events in Australia and overseas, at which speakers have compared Israel to the Nazis. “Let us be quite clear … the rallies are not just calling into question the right of the State of Israel to exist, they are overtly and stridently anti-Semitic,” she said.

AUJS Victorian education officer Julian Kowal related the impressions of a young Australian student currently in Israel on a Weizmann Institute scholarship as she watched the Iron Dome intercept Hamas rockets over Rehovot.

The RCV and COSV will hold a prayer service for Israel on Thursday, July 24, at the Werdiger Family Hall at 6.15pm.