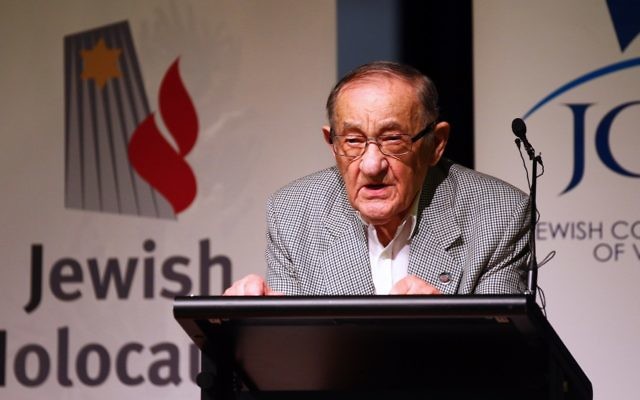 MORE than 450 members of the community joined parliamentarians and other dignitaries at Glen Eira Town Hall late last month to commemorate the victims of the Shoah.

Falling on the anniversary of the liberation of Auschwitz, January 27 was inaugurated as International Holocaust Remembrance Day by the United Nations in 2005.

Keynote speaker at the Melbourne event, hosted by the Jewish Community Council of Victoria (JCCV) and the Jewish Holocaust Centre (JHC), was Austrian ambassador to Australia Helmut Bock, who reflected on Austrian attitudes to the Shoah in his youth and the importance of remembrance and commemoration. He said that, upon reflection, Austrians of his generation saw themselves as victims of Nazi Germany and didn’t consider the plight of the Jews.

The commemoration, one of hundreds held across the globe, also heard from Shoah survivor Moshe Fiszman, who delivered a witness testimony, which demonstrated that even in the darkest times, there were good people who cared deeply about the Jews.

The 95-year-old, who endured the horrors of Majdanek as well as a death march to Auschwitz-Birkenau and Dachau, detailed the kindness bestowed on him and his fellow prisoners at Vaihingen concentration camp by Baroness Irmgard von Neurath, who risked her life to provide emotional and physical sustenance to inmates.

Discussing this year’s Holocaust Remembrance Day and its contemporary significance, JHC co-president Pauline Rockman said it is much more than a commemoration.

“United Nations Holocaust Remembrance Day is a day to honour the survivors,” she said. “A day, too, on which to reassert our commitment to human rights – to go beyond remembrance, and make sure that succeeding generations apply the lessons of the Holocaust to make the world a better place – fulfilling the Jewish goal of tikkun olam, and to bring peace and harmony to all mankind.”

JCCV president Jennifer Huppert, who also presented on the evening, outlined the importance of remembrance. “The event held in Melbourne was one of many similar events held around the world to commemorate the millions of lives lost during the Holocaust, and in doing so educate future generations about the horrors of the Shoah, and ensure that is not repeated.

“This is a message which has not lessened in importance, as Jews in Australia and around the world continue to experience anti-Semitism.”