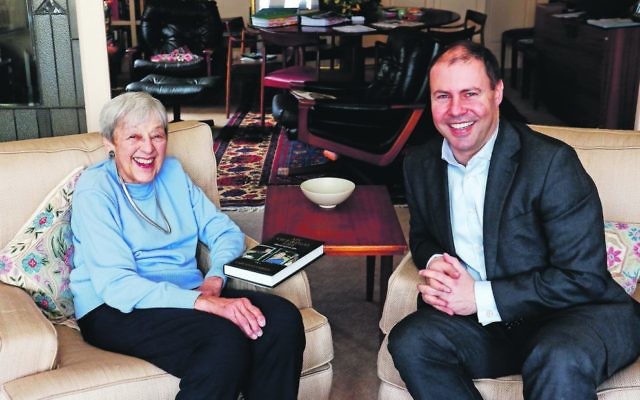 Lady Anna and Josh Frydenberg celebrate the release of 'My Vice-Regal Life'.

THERE are deeper insights in Lady Anna Cowen’s newly-published diaries of 1977-82, her years spent with the late Sir Zelman Cowen as Australia’s Vice-Regal couple, but her Yarralumla chef who learned how to prepare gefilte fish stands out as a heartwarming footnote.

While the Cowens were not the first Jewish couple at Yarralumla, residence of the Australian Governor-General, it would somehow be surprising if the staunchly Anglo-centric Sir Isaac Isaacs and Lady Deborah Isaacs, the first Jewish Vice-Regals, had noshed on gefilte fish during their 1930s tenure.

The launch of My Vice-Regal Life, the diaries of Lady Cowen, took place at another well-heeled Australian residence, Raheen, once the address of Archbishop of Melbourne Daniel Mannix, and for decades now, the home of the Cowens’ friends Jeanne Pratt and the late Richard Pratt in the Melbourne suburb of Kew.

At the June 28 event, Jeanne Pratt welcomed friends, supporters, and Federal Minister for the Environment and Energy, Josh Frydenberg, who was mentored by Sir Zelman and had the honour of launching the book, which will be released by Melbourne University Publishing on July 17.

The late governor-general “knew his achievements could not have happened without the support and the love of Anna Cowen”, said Frydenberg.

Surrounded by family, Lady Cowen announced she has dedicated My Vice-Regal Life to Sir Zelman and to their son Ben, who was killed in a paragliding accident at the beginning of this year.

Guests heard how the diaries –which, she admitted were at the time “never intended for publication” – made it from 15,000 pages of handwritten foolscap to a published book.

A typed version languished in “a cupboard by the laundry” until journalist Hanna Baum was given access, and the transformation into print began.

“Having someone read one’s diary used to be considered an invasion of privacy,” reflected Lady Cowen. “However, in this instance, I’m pleased to think that they may assist in providing an insight into a rarefied world.”

And while she kept a personal record “to retain events that would otherwise be lost to memory”, like that famous diarist, 19th century British prime minister William Gladstone, her jottings came to mean far more than their origin as a laundry list of the daily grind.

“Sir Zelman was a talented communicator and he loved public life. In short, he was a natural, in my opinion anyway, for this job at this time”, she said.

But there were downsides – the loss of her private life and disruption of their children’s schooling.

“I was now in a job that had no rulebook … meeting with heads of state … approving all decisions in relation to the running of the house,” said Lady Cowen, “but I was on a learning curve I began to enjoy very much … I can only express wonder at the hand fortune dealt us.”