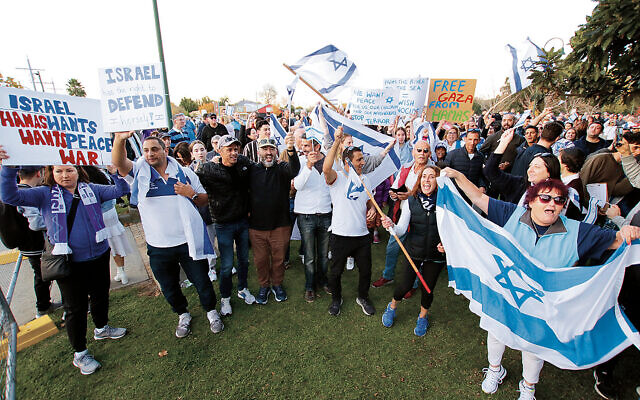 Participants at the pro-Israel rally in Melbourne. Photo: Peter Haskin

Melbourne’s pro-Israel rally saw about 2500 people turn up to support Israel vociferously and loudly. Only a month or so earlier 5000 people turned out to celebrate Yom Ha’atzmaut, which closely followed more than 1000 attending Yom Hazikaron.

Out of a community of 50,000 these attendances speak volumes for the actual, genuine and public support for Israel, and demonstrate that our community is unafraid to express that support.

The principal objective of the rally was to provide the community with an opportunity to band together in support of Israel and say that the more than 4000 rockets targeting Israeli civilians were 4000 too many. To demonstrate to our community here in Melbourne, that there is unequivocal bipartisan political support for Israel, not just when times are good, but also when Israel most needs that support.

It is important to disclose that from the very first meeting to plan the rally, the preferred venue was Princes Park, at which a successful rally was held in 2014; and which was considered the best location to maximise attendance from the community and to make our voice heard.

These objectives were unquestionably achieved. Thousands attended despite the threats reported by The AJN. Mainstream media here and overseas covered the rally and the community’s ardent support for Israel. This success was in spite, and in defiance of the monstrous online video and its ilk, which intimidatingly reverberated with terrorist imagery and menace.

In Shir Betar, Ze’ev Jabotinsky penned a verse labelled Tagar, which can be loosely translated as ‘standing up for what’s right’; and so we did, while choosing not to be silenced by – as Jabotinsky poetically called them – “obstacles and hindrances”.

Let’s be perfectly clear though – the threats were real. At different points during the lead-up, several sources placed significant pressure on the organisers to move the rally to a more secure indoor venue, with others suggesting cancellation. We resisted these calls, knowing full well that we had every right to assemble freely and that the vibrant, Zionist ruach that characterised the rally would not translate behind closed doors, within the confines of a shule or dreary hall.

Mindful, though, of the community’s safety, we worked closely with both Victoria Police and the Community Security Group (CSG) to address security concerns. Thanks to proactive policing, and to the professional and collaborative relationship between the CSG and the police, the rally proceeded.

Neither Zionism Victoria, nor our partners in organising the rally apologise for putting the safety of our community first. That priority also meant that the location of the event was suppressed until a few hours before it started; to not give a leg-up to those who schemed to disrupt the rally itself.

The suggestion that the rally could have been more visible is plainly ridiculous and ignores the stark reality of what actually happened. At a time when communal tensions were heightened following a most visible increase in antisemitism, the proposition that the emotional should have supplanted the rational is both foolhardy and irresponsible.

More important than how and why decisions were taken is the re-emergence of a vicious and troubling antisemitism; accompanied by growing intolerance from a number of quarters in the broader Victorian community. We supposedly live in a harmonious and inclusive society where free speech is not only valued, but protected. Racial and religious tolerance is advanced as a value and enshrined in law, yet these laws and protections failed the Jewish community over the last fortnight.

Organisations and individuals beyond our community invoked antisemitic rhetoric supported by lies and propaganda. Certainly, this incitement fuelled the fire and goaded the hatred that directly threatened to derail the rally while also giving rise to at least two antisemitic attacks during the event itself, which the police so ably thwarted.

In the face of these perils, the community and its leadership held the line. We did assemble – uncowed and unafraid – in our thousands to stand with Israel and stand for peace. In response to the threats, Zionism Victoria will be meeting with government ministers this week and over the coming weeks to demand the protection and tolerance promised to us by our celebrated, but clearly fragile multiculturalism.

We do this because this is the only way to act in a civilised society. We make our voices heard loudly and with conviction. We don’t resile from threat, nor do we incite it. We act judiciously, knowing that our commitment to advancing Israel’s case is only rivalled by our commitment to safeguarding Melbourne’s Jewry.

There is no better example than the certitude and bravery of one of our partners in particular. The leaders of the Australasian Union of Jewish Students demonstrated both impressive moral fortitude and unflinching steely resolve when they unhesitatingly expressed their determination to proceed despite the frightening threats levelled at them, both on campus and online.

Make no mistake, they are the undeniable heroes in the story behind Sunday’s rally. Jabotinsky would have been proud.