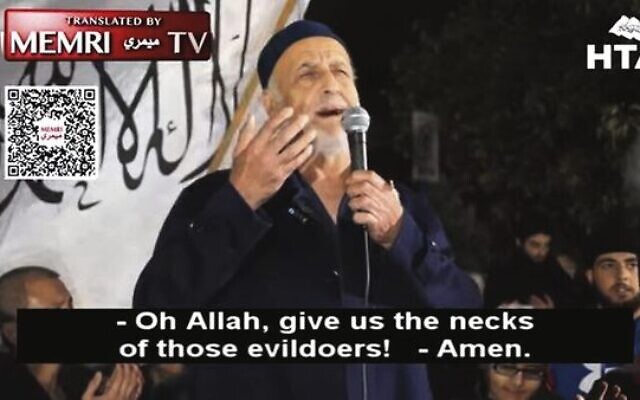 A screenshot from the video.

It comes after the Middle East Media Research Institute (MEMRI) translated a video of a rally held by the group in May where the crowd reportedly chanted in Arabic “Destroy the Jews!” and “O Allah, give us the necks of those evildoers!”

In a reply received last week, Ward wrote, “Racial vilification and public threats of violence have no place in a peaceful and harmonious NSW.

“I have spoken to my federal counterpart and asked him to investigate banning this organisation from Australia.”

The AJN understands Ward has since been advised to take the matter up with Home Affairs Minister Karen Andrews.

In a parliamentary hearing last Friday, Minister for Counter-terrorism Anthony Roberts said, “There’s no tolerance for this incitement of violence.”

In response to questioning by Secord, he said, “Symbols of hatred and antisemitism are unacceptable anywhere in our community.”

Meanwhile, Vaucluse MP Gabrielle Upton delivered a Notice of Motion in Parliament on Tuesday that “strongly condemns any display of antisemitism in NSW including recent reports of an antisemitism video posted by the Hizb ut-Tahrir organisation”.

Upton said she wrote to the Attorney-General and Police Minister on October 26 requesting they take action in relation to this “deplorable incident”.

NSW Police are investigating the video – along with another Hizb ut-Tahrir video that emerged last year – with a view to referring it to the Director of Public Prosecutions for potential legal action under NSW’s new anti-incitement laws.

In a submission to the Parliamentary Joint Committee on Intelligence and Security in February this year, the Australia/Israel & Jewish Affairs Council (AIJAC) argued that given it is often claimed Hizb ut-Tahrir cannot be listed as a terrorist group under the current legislation, the government should consider amending the Crimes Act to “explicitly prohibit violence, incitement or the glorification of violence against a racial or religious group”.

“This would assist in providing a legal remedy for groups and individuals that seek to harm Australians but fall short of the legislative threshold for proscription,” AIJAC said.