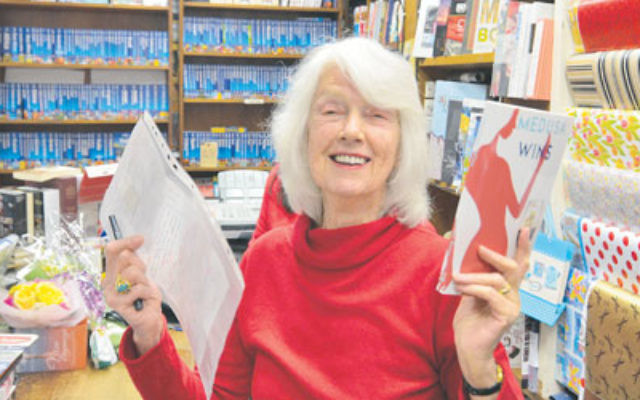 MIRIAM Kuna had forgotten all about Mary King’s Poems and the Spring of Joy until by chance, she came across the memento at her home.

“It was presented to my mother in 1934 by the Kadimah Women’s Committee and the members signed their names in it, some in English and some in Yiddish,” says the Melbourne writer best known for her fashion industry expertise.

The fact that a book by an early 20th century English romantic novelist and poet was deemed a suitable gift for her mother, Rose Brilliant – “she was the committee’s president” – doesn’t strike Kuna as odd.

“Back then,” she recalls, “Australia was part of the British Empire and that was the dominant cultural influence.”

One can only guess at what the Kadimah ladies would have made of Medusa Wins, Kuna’s recently published collection of short stories, poems and non-fiction articles.

“They range … from bitingly funny to painfully confronting,” notes the book’s back-cover blurb, though at least a couple of the autobiographical pieces would have won nods of recognition.

“North Carlton: My Nation State” and “Castles in Caulfield” will certainly resonate with those who, like Kuna, grew up in what was once the heart of Melbourne’s Jewish community and moved south of the Yarra as their families prospered.

Sam and Rose Brilliant, who left Lodz for Melbourne in 1913 and arrived “broke, optimistic and carefree”, did better than most.

After a typically tough start – he worked in a cork factory, she earned 25 shillings a week as a machinist – Sam established his successful Brilliant Knitting Mills in North Carlton and sharp-witted Rose was soon prominent in her own right.

“Dad was keen on business, mum liked heading committees,” says Kuna. “She had fantastic taste in everything from clothes – all custom-made, of course – to jewellery and objets d’art.”

Rose was also a champion balabusta (homemaker), though domestic management was not among her favourite topics.

“If you couldn’t discuss politics or world news or the Jewish National Fund … or culture in the traditional European sense, which included English, German and Russian literature, theatre, philosophy, political parties and personalities … you didn’t get far with mum conversationally,” recalls her daughter in Medusa Wins.

Kuna paints a vivid picture of Jewish life in pre-World War II Melbourne; a community in which there was a wide gulf between the newcomers and the long-established Australian Jews, who “regarded themselves as infinitely superior to the brash and excitable Yiddish-speakers”.

There were other divisions, especially when the clouds darkened over Europe. As the Nazis’ power mounted, numerous fiery debates between Zionists and those who opposed the establishment of a Jewish state raged at that multi-purpose cultural icon, the Kadimah.

Politics easily trumped piety in the Carlton of her youth, observes Kuna. As she writes in Medusa Wins: “There was a great deal of socialist talk and communist sympathising, but very little religion, for the Jews of (the) Kadimah were humanist and sociologically oriented rather than spiritual.”

Among the ardent young communists in the era, before the horror of Stalin’s Russia was revealed, was Kuna’s older sister Rivkah – typical of many in Carlton’s Polish-Jewish hub, though their deepest loyalties had nothing to do with politics.

“What really bound us was our Yiddishkeit,” reflects Kuna. “That transcended everything, including wealth. My parents were well off, but their best friends were a couple who had very little and worked in factories.”

By 1939, the Brilliants had the means to engage leading architect Edward Billson to design their splendid new home in North Caulfield. Keeping up with the Jewish Joneses came with a “must-have” list.

“You had to order your furniture from Krimper (whose work was displayed in the National Gallery) … carpets were wall-to-wall Wilton imported from England and your painter and decorator was always Gurvitch,” records Kuna.

Her memories of her privileged teenage years remain sharp. Dances at Temple Beth Israel and sing-songs at the St Kilda synagogue; summer holidays at the Brilliants’ beach house in Aspendale; family dinners at Florentino’s, then owned by her parents’ friends, the Wynns. For her, life was a breeze.

Rivkah didn’t want a bar of it. True to her principles, she worked as a Communist Party functionary for a pittance and lived in a rented bedsit in Fitzroy Street, St Kilda. Her sister didn’t lack spirit either.

“When I was 16,” reveals Kuna, “I went to an employment agency during my school holidays and got myself hired as a cleaner at the Sacre Coeur convent in Windsor. I rode my bike there and every morning I had to clean 14 bathrooms, scrub the kitchen floor and serve tea to the nuns and teachers.”

The feisty escapee from Caulfield went on to graduate from the University of Melbourne and studied at the Sorbonne and University of Nice, before discovering her forte lay in fashion.

In 1991 Kuna established the Melbourne School of Fashion, a private educational institution offering a variety of courses covering all aspects of the fashion industry, and which is still going strong. She also ran her eponymous boutique in Brighton for years and is the author of the excellent textbook, Australian Fashion: Starting Your Own Boutique.

Along the way, she’s had numerous adventures at home and abroad. Medusa Wins offers some tantalising glimpses.