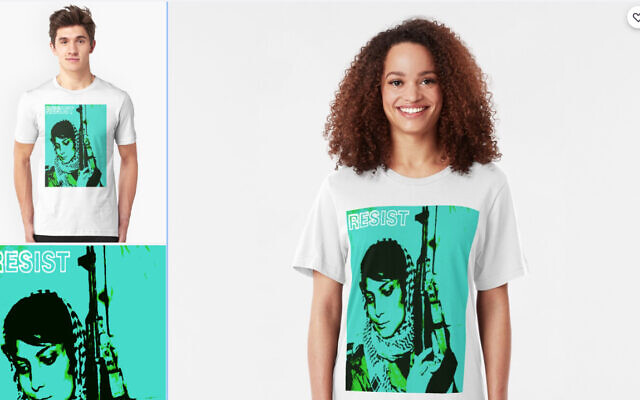 The t-shirt featuring Leila Khaled that was sold on Redbubble. Photo: Screenshot

TWO online retailers this week earned the ire of the Anti-Defamation Commission (ADC) for selling items that call for an end to the State of Israel.

As The AJN went to press on Wednesday, US website Etsy and Australian-based seller Redbubble were continuing to sell t-shirts printed with the slogan, “Make Israel Palestine Again”.

Redbubble – which has previously come under fire for selling products such as pillows, mini skirts and tote bags with images of Auschwitz on them – was also blasted by the ADC for allowing a t-shirt featuring the word “Resist” with a picture of Palestinian terrorist Leila Khaled holding a rifle to be sold on its site.

Following an enquiry from The AJN this week, Redbubble said it takes “a strong stance against racism and violence” and removed the t-shirt, along with iPhone cases depicting Khaled, for violating the website’s community guidelines.

ADC chairman Dvir Abramovich told The AJN on Tuesday that while he was pleased Redbubble had listened to concerns over the products, “it is staggering that this item did not raise any red flags”.

“It would have taken no great leap of the imagination for anyone at Redbubble to figure out that the inclusion of the image of convicted plane-hijacker Leila Khaled, holding a rifle, with the word ‘Resist’ was as a glorification of terrorism, and is tantamount to encouraging buyers to embrace murder against Israel and its supporters,” Abramovich said.

“Khaled is a council member of the Popular Front for the Liberation of Palestine which took credit for the 2014 murder of four worshippers and a police officer at the Har Nof synagogue, and which in 2017 celebrated the 45th anniversary of the attack at Lod Airport that killed 26 Israelis.

“By selling this shirt, Redbubble is indirectly celebrating and venerating these atrocities and will be seen by many as facilitating incitement.”

Meanwhile, Abramovich has called on Etsy and Redbubble to remove the “Make Israel Palestine Again” t-shirts or explain “why incitement against any people is within the boundaries of legitimate trade”.

“What’s next, products that endorse the extermination of Jews around the world?” he said.

“These shirts, plainly and simply, call for the elimination of Israel and its replacement with a Palestinian state. Any product that explicitly promotes the destruction of a country which is home to nearly 50 per cent of the world’s Jews is antisemitism of the worst kind and is beyond the pale.”

He added, “We call on both companies to immediately stop selling these items and to ensure such moral lapses in judgement do not occur again.”