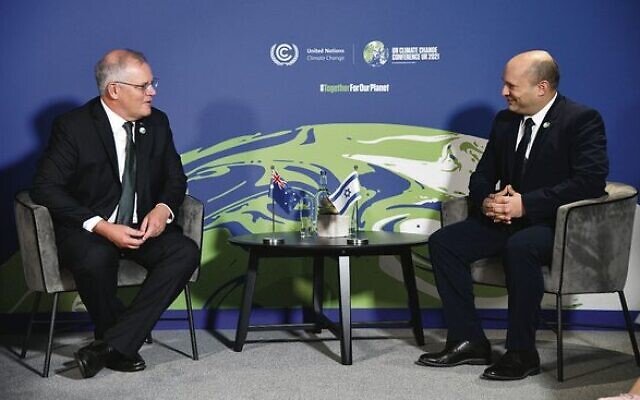 THE warmth between Australia and Israel could be felt in Scotland this week, when respective prime ministers Scott Morrison and Naftali Bennett met for the first time on Monday on the sidelines of the COP26 conference.

As well as addressing climate issues, the leaders discussed the Iranian nuclear threat, and Bennett requested that Australia officially defines Hezbollah, in its entirety, as a terrorist organisation.

The Israeli PM thanked Morrison for his country’s long-standing support of the Jewish State in the international arena, noting, “We view you personally as a friend and supporter and of course, we view Australia as a huge friend. I’m looking forward to strengthening our relations.”

Noting, “we have such a strong and vibrant Jewish community,” Morrison invited Bennett to visit Australia, an invitation his counterpart reciprocated.

“We set our pledge to zero emissions by 2050. It ought not to be a political issue. It’s not between left and right. It’s really for our future and I think our unique contribution is not our footprint because we’re a pretty small country,” Bennett said. “But really harnessing the energy of ‘the start-up nation’ to saving the planet.”

Morrison responded, “If there’s one thing Israel’s proven to everyone it’s that you can solve the hardest technology challenges.”

COP26 delegates descended on Glasgow after a preceding G20 summit failed to commit to a 2050 goal to stop net-carbon emissions, a target commonly given as the cut-off to prevent critical global warming.

JCN chief executive Joel Lazar noted the focus of COP26 is on setting the Paris climate accord into action, increasing the 2030 emission reduction goals set in 2015 “and setting down equally ambitious policies that transform the energy sector, industries, transport and agriculture”.

Lazar said the federal government “recently made an overdue commitment to achieve a net-zero emissions economy by 2050 … While this was an important market signal, it was not accompanied by any new interim targets to be achieved by 2030, nor any new policies to match, both of which are considered necessary to achieving a goal so far away as 2050”.

“Amidst all the sloganeering, we must not lose sight of what this is all about – averting catastrophic global warming.”

Turning to Jewish tradition, Lazar described the climate crisis as “a fork in the road straight out of the book of Devarim: ‘I have put before you life and death, blessing and curse. Choose life, that you and your descendants may live’.”

“Will our leaders choose life at COP26? That depends on their desire to work together for the common good.”