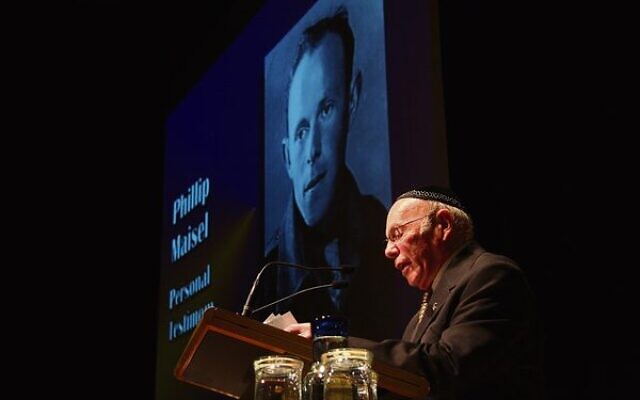 Phillip took on his mission of safeguarding survivors’ recollections in keeping with a vow he made that if he survived, he would tell the world what he and others had experienced. While much of his work was interviewing others, his memoir, The Keeper of Miracles, launched last year, portrayed his own suffering.

On behalf of the Melbourne Holocaust Museum’s executive and staff, CEO Jayne Josem this week stated, “Those of us who worked with Phillip feel privileged to have had him as a colleague; to some, he became a friend, and to all, he was a quiet and determined inspiration.”

MHM co-president Pauline Rockman said, “His spirit lives on in our hearts and minds, and his legacy will endure. I will miss him so much.”

His legacy will live on through the Phillip Maisel Testimony Project, a collection of the many survivor testimonies he recorded.

Born in 1922 in Lithuania, he was arrested when German troops came to Vilna, and spent months in the Vilna Ghetto. He was taken to six labour camps in 1943 and 1944, and was liberated by French forces in April 1945.

Arriving in Australia in 1949, Phillip and his late wife Miriam raised a family. In 1990, he began volunteering at the Holocaust Centre, soon beginning a 31-year involvement as director of its testimonies department, recording more than 1500 video testimonies.

Recognised with an Order of Australia Medal in 2008, he retired from his testimonies work only last year. On his 99th birthday last August, the centre held a tribute event at which Josh Frydenberg, then federal treasurer, said Phillip’s work “means that future generations will learn about the Holocaust and help make sure that the crimes of the Nazi killing machine are never repeated”.

Dr Gideon Greif of Yad Vashem told him, “The testimonies of Holocaust survivors have no substitute … You understood this best of all.” Sydney academic Professor Konrad Kwiet said he answered the plea, “Jews, write and record!” by historian Simon Dubnow, who perished in the Warsaw Ghetto.

His century-long journey was shared with his surviving twin sister Bella Hirshorn. Torn apart by the Shoah, they were reunited in 1945 at the Landsberg refugee camp. “For some time, we just held each other in the middle of the camp and wept for joy,” he said.

On his testimonies work, he stated, “This is my responsibility and my privilege – to be custodian of their memories, to be able to pass their stories on to the next generation.”

In their eulogy, daughters Michelle Deutsch and Yvonne Sherwin said their father “passionately believed that the most important thing is to teach people to love, not to hate”.

The Jewish Community Council of Victoria said in a statement, “Phillip was a much-loved member of the Victorian Jewish community, a participant in community Yom Hashoah memorial services and an engaging and dedicated Holocaust educator.”

Australia/Israel & Jewish Affairs Council executive director Colin Rubenstein said he “will long be remembered with gratitude by the Jewish and wider community”.