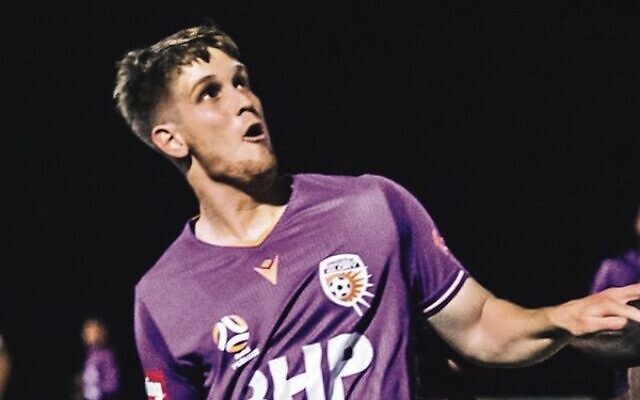 When 19-year-old Perth Glory Academy player Jacob Muir played his first match for the men’s team last November in an Australia Cup match against the Melbourne Victory, he told The AJN he was grateful for the opportunity, and looked forward to “continuing to work hard, to give myself the best chance at making an A-League Men’s debut”.

Last week that dedication was rewarded, when the former Maccabi WA Junior Sportsperson of the Year was selected by coach Ruben Zadkovich to start in not one, but two A-League Men’s games for the last-placed Glory, who have been plagued by injuries and long away trips.

The 183cm tall central defender played the full 90 minutes and acquitted himself well in a 0-1 loss to the Wellington Phoenix in rainy conditions in Sydney on April 13.

It was the Glory’s third match in six days, and fatigue clearly took its toll.

Zadkovich thanked Perth fans for “supporting these young players, and the team, through these tough times”.

Perth will play Adelaide in South Australia this Sunday afternoon, and then complete their season with two home games.

Born on May 3, 2002, Muir will turn 20 just one day before what is likely to be his fifth A-League Men’s match, which would be the ultimate birthday gift.