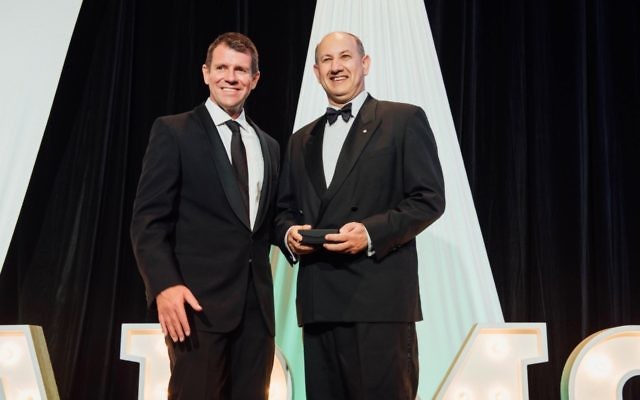 The honour is awarded annually to recognise the contribution and achievement of an individual or organisation in promoting social cohesion, understanding and acceptance between members of NSW’s differing cultural or faith communities.

The citation noted Jones’ outstanding advocacy of multiculturalism, his international leadership in the fight against anti-Semitism, his pioneering work in interfaith dialogue, his decades of activity with Indigenous and many ethnic and religious communities, and his commitment to human rights.

“Mr Jones has demonstrated a commitment to building bridges between various communities and religious groups in our multicultural society,” Baird said. “He was the recipient of an Australian Human Rights Medal for his work against racism in 2007 and is a deserving recipient of tonight’s top honours.”

Jones was a founder of the Australian Partnership of Religious Organisations, and serves on the NSW Police Commissioner’s Multicultural Advisory Council. He is a former president of the Executive Council of Australian Jewry and currently in his 26th year on the executive of the NSW Jewish Board of Deputies.

“I see this award as a tribute to all my colleagues in anti-racism, Indigenous reconciliation, interfaith dialogue, multi-faith collaboration and promotion of a kinder, more caring, Sydney, New South Wales, Australia and world,” Jones said.

AIJAC national chairman Mark Leibler described the award as “a richly deserved honour”, while executive director Colin Rubenstein said that “no-one works harder or with more passion for interfaith and inter-communal harmony than he does.

“He is an ornament, not only to AIJAC and the Australian Jewish community, but to Australian public life as a whole.”