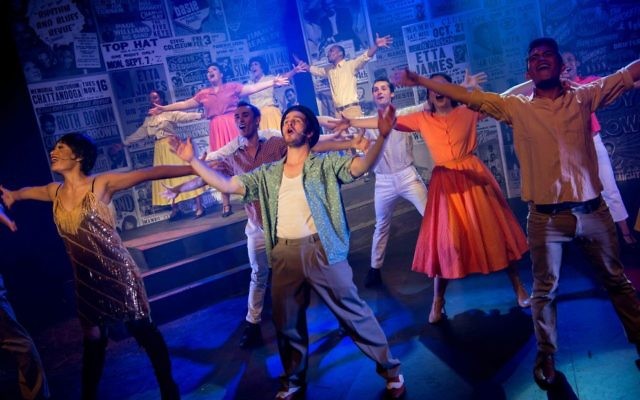 Dancers in the musical, Memphis.

THE Tony Award-winning musical Memphis, which has its Australian premiere at Chapel off Chapel in the Melbourne suburb of Prahran on October 6, is set in the 1950s when rock’n’roll was about to burst onto the music scene.

James Elmer plays ambitious young white DJ Huey Calhoun, who is passionate about African-American rock music and is determined to bring it to a mainstream audience, despite constantly risking his job.

He meets talented black singer Felicia (played by Elandrah Eramiha-Feo) and promises to get her on the radio for her big break, while also falling in love with her, despite the racial conflict and segregation of the time.

Against this backdrop is plenty of drama, music and dancing as Huey and Felicia follow their dreams.

In addition to a host of songs, Memphis features many dance routines that have been choreographed by Kirra Sibel.

“It is a great show with a lot of rock numbers and catchy dances,” said Sibel, a former student at The King David School who is currently studying dance, drama and teaching at Deakin University and also teaching drama to primary school students through Drama Time.

In 2015, Sibel received a Lyrebird youth nomination for Best Choreography for Mount Scopus Memorial College’s production of Seussical, and has also choreographed other musicals at the college including Guys and Dolls and Mary Poppins.

Memphis is at Chapel off Chapel, Prahran until October 28. Bookings: www.chapeloffchapel.com.au