Even before I dialled Jonathan Seidler’s number, I knew we would have a lot to talk about. As someone who has gone through my own grief, losing my mum in 2014, I empathised with his story.

It was my mum. It was his dad. My mum died from cancer. His dad died by suicide. Different parent, different death, different grief. But it’s a club. And it’s a club that no young adult ever wants to be part of.

He writes: “I doubt there’s a guide to dealing with death that advocates becoming a ruthless ninja, but it helps when faced with hundreds of well-wishers attempting to project their grief onto you, using you as a sounding board to explain how they are coping. If you let even one of these people in then it can easily flood the whole system. So I don’t.”

It quickly becomes clear that while the topic is incredibly heavy, Seidler is a natural storyteller. And It’s A Shame About Ray is impossible to put down.

When we’re talking, Seidler harks back to his childhood, describing writing as his “first love”.

“Writing and reading was my passion. We used to do the MS Readathon a lot, and they sent me to the high school library when I was in primary school, because I’d read all the books. It was just something I really liked doing. And I was very lucky that I went to a school where that was encouraged,” he said, referring to Moriah College.

His music was also encouraged. And It’s A Shame About Ray – his memoir which he describes as “a book about Judaism and Linkin Park” – is where music and writing meet.

“Families keep living. I’m still alive. If somebody at the time had told me that I would have put out a book, and my brother would be at Movember and my sister would be running a news company, I would laugh. Because we’re all sitting in the house, and it’s shiva, and we’re wearing black socks, and the world has ended.”

But it didn’t start that way.

“I was always very interested in the idea that traditionally, in Judaism you can’t be buried in a Jewish cemetery, if you die by suicide, and that was always something I found quite problematic,” Seidler explained.

“So, the initial concept was that my dad would basically hang out in this processing refugee centre halfway between heaven and hell – which we don’t really believe in – and that he would meet all the other people who died by suicide, who of course are a lot of bands and rock stars – the singer from Linkin Park, Kurt Cobain, you get all of those people.”

But then, as Seidler was writing, the TV series The Good Place came out, and while it’s not exactly the same, Seidler said the concept was similar enough for him to scrap his initial idea.

It was a close friend of his who led him to write what we are all able to read today, telling him the bits where he spoke about his dad worked. That he had to follow that path. It all flowed from there.

“It just started coming out really fast and kind of fully formed, which is not usual. It was just straight from my brain to the pen, and a lot of what’s in that book is pretty much how it came out. It just felt like something I needed to do,” he recalled.

The memoir is incredibly relatable and, also, incredibly important. As Seidler said, it has been almost a decade since his dad died, but men’s mental health is still not talked about enough.

“After my dad passed away, there were maybe three or four instances of people that I knew of or their parents who also died by suicide. And what I found really interesting is that despite the fact that some of those were quite public in that people knew about it, there wasn’t really a conversation happening around it, it was still very hush hush. It struck me that nothing was getting better, particularly with men,” he said.

“I think it really hit home for me when [the father of] one of my best friends from school died in almost the same way. I just remember looking around asking why we are such a good community, rallying around each other, but the pre-emptive work isn’t being done?”

Seidler said that writing the story, from his perspective, and paying homage to the community in which he grew up – which he clarifies he feels very privileged to be part of – will hopefully help close the gap. 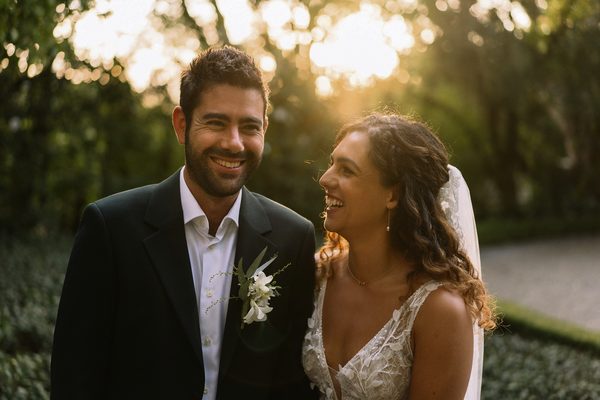 Jonathan and his wife, Keren.

For Seidler, writing the book during lockdown proved to be a blessing in disguise. Describing himself as “old school, Moleskine, Artline, café window – very rigid”, he didn’t believe he could write anywhere else. But then, he had no choice.

“What I found is, firstly, I could write in my house and at some point, I was writing incredibly heavy stuff with my wife literally sitting on the couch, watching Ru Paul’s Drag Race. Because, you know, necessity is the mother of invention,” Seidler explained. “But also, what I discovered is that I could write on my phone. I wrote the final chapter and the middle chapter of my book entirely on my phone. And that was a really liberating experience.”

Seidler said that it was only when he showed the manuscript to his family and received some strong feedback that he began to consider what a published book on this subject would mean on a larger level. He acknowledged that when people pass away, especially though suicide, the assumption is that the family breaks down, that it’s the end of the entire family’s life. But Seidler wants to dispel that myth.

“It just started coming out really fast and kind of fully formed, which is not usual. It was just straight from my brain to the pen, and a lot of what’s in that book is pretty much how it came out. It just felt like something I needed to do.”

“It’s traumatic and it’s horrible, nobody’s discounting that, but I thought you never really see a family rebuild themselves. And my family, for better or worse, has done a pretty good job of that. I wanted to show people that it is possible,” he said. “Families keep living. I’m still alive. If somebody at the time had told me that I would have put out a book, and my brother would be at Movember and my sister would be running a news company, I would laugh. Because we’re all sitting in the house, and it’s shiva, and we’re wearing black socks, and the world has ended.

“I just think having a positive ending to the book was also really important. Books like that, they drown you in grief, and they don’t give you anything in the end, you end up coming out worse than when you went in. And I don’t think that’s beneficial to anybody,” he continued.

“I think everybody is aware of the damage that suicide does to families, but I think they’re not aware of how prevalent it is, and how you need to be able to move through it. Because it’s going to touch everyone, whether it’s directly or inadvertently.”