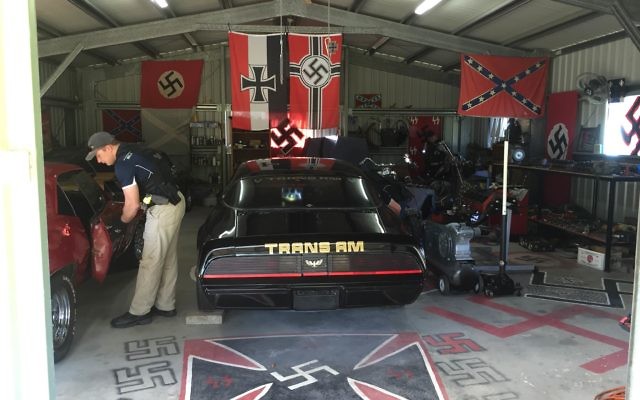 QUEENSLAND Jewish Board of Deputies president Jason Steinberg has called for a permanent Holocaust and Tolerance Museum in the state after a number of Nazi items were discovered during police drug raids in northern Queensland last week.

“It’s not acceptable to us, as a community, that there are people who glorify the Holocaust or Nazism,” Steinberg told The AJN. “Education is the key to be able to change community understanding.”

A number of Nazi flags and emblems, as well as American rebel flags, were found in a premises and shed in Cooktown, reportedly owned by a 48-year-old self-proclaimed white supremacist who has a large swastika tattooed on his head.

“It is a disturbing reality these raids uncovered the vile link between right wing extremism and organised crime,” he said.

“Revelations like this also send a proverbial shudder through the Queensland Jewish community who have been concerned about the rise in anti-Semitism across Europe and in other parts of Australia.”

Steinberg said the question the relatively small Queensland Jewish community of 8000 people need to ask is, “How do we stop elements of society fostering such extremist ideology?”

“The answer rests in education. Educating school-aged children about hatred and intolerance through the lens of the Holocaust is one way to address this issue,” he said.

Stating the need for a permanent Holocaust and Tolerance Museum, Steinberg added, “Until we have such an avenue to educate the general public, anti-Semitism in all its forms will prevail. We can’t let that happen.”

“As demonstrated by the attack on a Jewish community centre in Kansas in April 2014 and the massacre in Charleston, South Carolina last week, the lethal threat posed by individuals motivated by far-right and neo-Nazi ideology remains very real,” Wertheim said.

“We hope that this discovery will serve to sharpen the focus on these activities to ensure that those who seek to glorify or take inspiration from Nazi brutality are identified and shamed.”

B’nai B’rith Anti-Defamation Commission chair Dr Dvir Abramovich said the discovery was “a reminder that there are individuals and groups in our midst whose hateful and perverse ideology poses a threat to all Australians regardless of colour, creed and religion”.

A spokesperson for Queensland Police Service told The AJN the Nazi items were not seized and “no further action” is planned in relation to the paraphernalia.

The shed where the items were found.