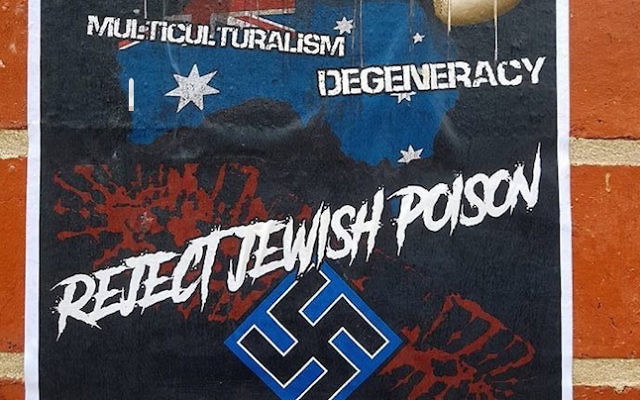 One of the posters found by Melbourne Zoo. Photo: Courtesy of the Online Hate Prevention Institute

ANTI-SEMITIC and racist posters have been stuck on walls in Melbourne this week by a group claiming to be “Australia’s only National Socialist Youth organisation”.

Two of the posters were found by Melbourne Zoo, and according to the group’s Twitter account, others were put up in the vicinity of Carlton Football Club and Melbourne University.

One poster – headlined “Stop the hordes” and listing a number of offensive terms for people of Arab, African and Asian heritage – shows a hand with a Star of David emblazoned on it pouring out a tube of people onto a map of Australia. It also has a swastika on it and states “Keep Australia white”.

Another poster shows a stereotypical Jewish figure looming over Australia, together with a swastika and the slogan “Reject Jewish poison”.

According to the Online Hate Prevention Institute (OHPI), the group posted a thread on a far-right forum last October stating, “This is the central topic for the Antipodean Resistance. We’re a National Socialist youth organisation in Australia, primarily based in Melbourne. We’re both a youth organisation and a fraternity for our members, doing what we can to help each other out.

“As this country has very little fascist activity it’s about time we stepped it up.

“Our members must be fanatically devoted to our cause, and we demand discipline and honour. No weaklings, degenerates, and no keyboard warriors. We want action. We do stickering, hiking, martial training and in the future we will do demonstrations.”

The same month, a number of homophobic posters headlined “Get the sodomite filth off our streets” with an image of a gay man being shot in the head and the same swastika logo were plastered on the walls of Swinburne University on the day of a gay pride event.

The group also put up a number of racist posters at the University of Melbourne in December.

Labelling the group as, “anti-Semitic, homophobic and racist,” OHPI CEO Dr Andre Oboler said, “They are carrying out stunts to get media and online attention in the hope of attracting followers.

“They really don’t deserve the attention. We urge anyone who sees their posters to simply pull them down and bin them.”

For more information on the OHPI, visit www.ohpi.org.au.