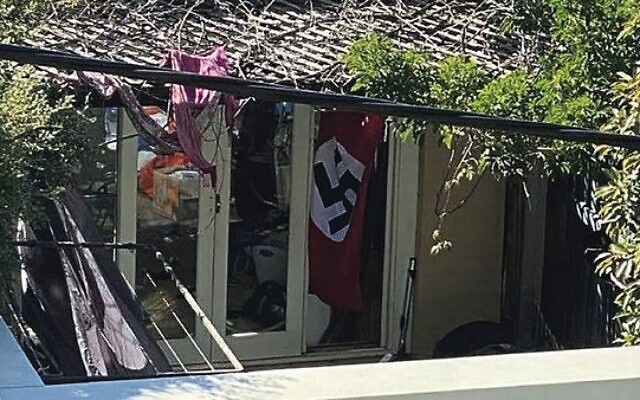 A swastika flag at a home in Newtown, in Sydney's inner-west, in April 2020.

NEW South Wales is yet another step closer to criminalising the display of Nazi symbols, with a government bill expected to be ready by the end of June.

NSW attorney-general Mark Speakman said last week the bill is currently being drafted after a parliamentary inquiry in February recommended that a bill introduced by Shadow Minister for police and counter-terrorism Walt Secord with the same aims proceed for debate.

Speakman said a recent rise in the prevalence of far-right groups is partly behind the move.

He said it is important hateful displays of the swastika are banned in order to “provide an additional safeguard to the existing protections in NSW against vilifying conduct”.

“We have seen the rise of far-right groups and neo-Nazi groups, particularly during the COVID lockdowns, so we’ve seen an increase in antisemitic activity,” Speakman said.

“Nazi symbols cause enormous distress to Holocaust survivors, to the Jewish community, and generally to ex-servicemen.

“There’s no reason why we should allow the public display of these hate symbols unless there’s a genuine religious reason, such as that used by the Hindu, Jain or Buddhist religions, or by the museum or through an educational purpose.”

NSW Jewish Board of Deputies (JBD) CEO Darren Bark said it would be a significant step and will be particularly meaningful to Holocaust survivors and their families.

“Unless used in a historical or educational sense, Nazi symbols do not belong in NSW,” Bark said.

“For the Australian ex-servicemen and women who fought to defeat the Nazi regime, and the remaining Holocaust survivors and their descendants living in Australia, seeing these symbols on our shores are disturbing and vivid reminders of the atrocities they endured at the hands of the Nazis.

“Nazi symbols are also being used by right-wing extremists both in person and online, to embolden and recruit those to their cause.

“This legislation will ensure there is a clear distinction between legitimate and unlawful use of Nazi symbols. It is a much-needed law in our state.”

“I accept – in good faith – their assurances that they genuinely want to proceed with the aims of the bill,” he said.

But he said that if it was “a delaying tactic”, he would put his bill to the Legislative Council, where he said there is “strong support from the cross-bench”.

“Put simply, I want to see the public display of Nazi symbols banned in NSW,” said Secord, who is deputy chair of the NSW Parliamentary Friends of Israel.

“It is a symbol of hate and genocide – and to see it on NSW streets in marches or flying from a flag pole is deeply offensive.”

Hindu Council of Australia national vice-president Surinder Jain, who partnered with the JBD in a landmark joint submission to the inquiry, has also welcomed the legislation.

“Due to a superficial resemblance between the Sacred Swastika and the Nazi hate symbol of Hakenkreuz, faith communities have not been able to display their sacred icon in public for fear of persecution,” he said.

“The display of Nazi symbols is a red line in public discourse, and the banning of these hateful symbols will be a step towards creating a safer and more cohesive and harmonious society,” he said.

“We look forward to similar legislation being introduced to the Victorian Parliament in the first half of this year, as has been foreshadowed, and to seeing other states follow suit, so that such racist and offensive displays become a thing of the past.”