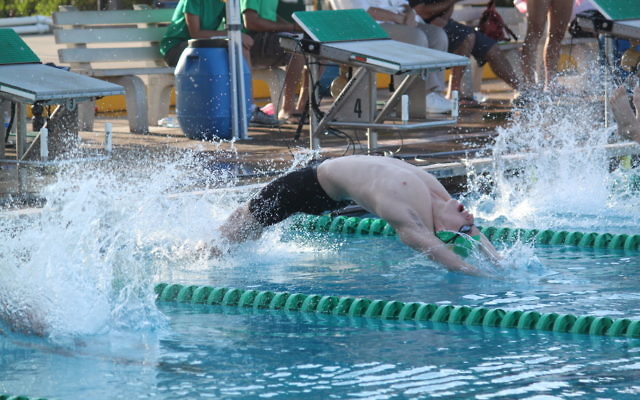 BENNO Negri has returned from the Junior Pan Pacific Championships in Maui, Hawaii, with a silver medal in his carry-on luggage, following a star turn at the competition.

In his debut for the Australian team, 16-year-old Negri – who trains with the MLC Aquatic squad – won silver as part of the boys’ 4x100m freestyle relay, with the green-and-gold foursome touching the wall seconds after the Americans.

“It was definitely a highlight, really incredible,” Negri said.

“Being among boys who are top of the level swimming in America, top in Japan, top in China, and competing against them, it really brings out the best in you and the best in the team.”

During the individual events, Negri recorded a personal best time of 51.17 seconds in 100m freestyle.

The young gun also smashed his previous personal best in 100m backstroke (57.7 seconds) and clocked an impressive time of 23.44 seconds in 50m freestyle.

Negri was also one of a host of Jewish swimmers competing at the recent Victorian Age Short Course Championships.

At the Melbourne Sports and Aquatic Centre pool, Negri registered an Under-16 Victorian record on his way to gold in the 100m freestyle (49.23 seconds) as well as placing first in the 50m and 200m freestyle events, and winning silver in the 100m and 200m backstroke.

Several Jewish swimmers in various age groups distinguished themselves at the Championships, including Negri’s 14-year-old brother, Dante, who won silver for the 50m freestyle and bronze in the 100m individual medley.

Also excelling in the Under-14 category was Jordan Hazan, who took home silver medals in the 400m freestyle, 400m individual medley and 200m butterfly and a bronze in the 200m medley.

Brooke Roseman, 12, was in fine form at the Championships, clinching bronze in the 50m freestyle and 100m backstroke, while 14-year-old Isabella Smorgon reached the 200m breaststroke final, finishing ninth.

The National Swimming Council of Maccabi chairman Mark Roseman said he was excited about the up-and-coming crop of Jewish swimmers.

“Maccabi feels privileged to offer such talented, hardworking young men and women the opportunity to experience international events such as the 2015 JCC Games in the USA and 2017 Maccabiah Games in Israel.”