JEWISH leaders have condemned a neo-Nazi group for assembling outside Adelaide’s Holocaust Museum and giving Nazi salutes which they photographed.

The incident has triggered a South Australian Parliamentary inquiry into banning public Nazi symbols and the rise of extremism in the state.

The neo-Nazi gathering outside the Adelaide Holocaust Museum–Steiner Education Centre (AHMSEC) followed a recent antisemitic sticker attack on the museum. 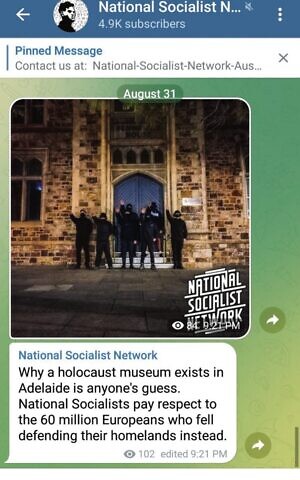 The prospect of banning public displays of Nazi symbols and the rise of extremist activity will come under the spotlight in a Parliamentary investigation, with One Nation MP Sarah Game heading a select committee announced by Adelaide’s Legislative Council, and backed by the Malinauskas ALP government.

Game, who is Jewish, helped pass the SA Parliament’s endorsement of the IHRA antisemitism definition this year. Sources told The AJN plans for an inquiry had been developing but were brought forward after the latest incident.

Stating the JCCSA will make submissions to the inquiry, Henderson-Sapir said, “The recent escalation of activity by extremist groups in South Australia is an affront to Australian values. I welcome this important inquiry into the use of neo-Nazi symbols and contemporary discrimination faced by Jewish South Australians.”

Condemning antisemitic incidents at the museum, AHMSEC director Kathy Baykitch told The AJN, “It was disturbing to review and watch CCTV footage of a group of young men being photographed outside the museum giving Nazi fascist salutes. The most recent incident reflects that extremist groups are actively organising in online spaces in South Australia and brings to the fore the critical importance of teaching young people about the Holocaust through our education programs … I would like to thank the SA Police for its response and support.”

Baykitch welcomed the Parliamentary committee inquiry, noting that the government “recognises the increased brazen activity of extremist groups such as the National Socialist Network in South Australia”.

“The museum hopes that the inquiry will consider prohibiting the public display of symbols used by neo-Nazi groups,” she added.

Repeating his call for the South Australian government to follow Victoria and NSW in criminalising public displays of the Nazi swastika, Anti-Defamation Commission chair Dvir Abramovich stated, “To violate the sanctity of a Holocaust museum is beyond words and beyond contempt and shows that these Hitler worshippers are willing to cross every red line.”