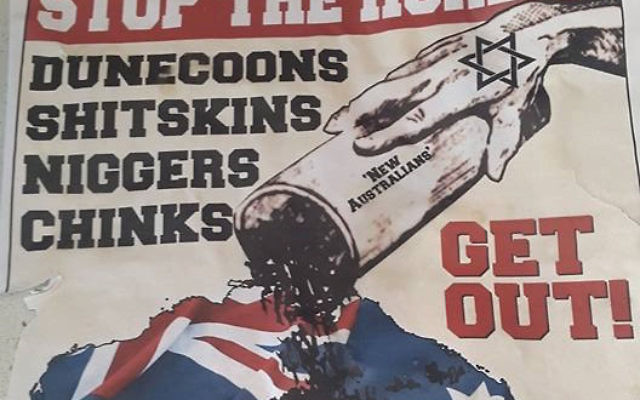 Part of the offensive poster distributed around the University of Melbourne campus.

A RACIST, anti-Semitic poster has been circulated around the University of Melbourne campus, depicting Jews as introducing “hordes” of minorities – which are described using derogatory names – into Australia.

A spokesperson for the university told The AJN about 100 posters around the campus have been removed or painted over after they were discovered last Saturday.

“Due to the content of the posters and the damage caused to buildings, the university has reported the incident to Victoria Police and will assist in any investigation.

“The university is committed to a safe, inclusive and respectful environment for its diverse community. Activities of hatred and intolerance from any group against another are not tolerated, and the university condemns the sentiments in these posters,” the spokesperson added.

B’nai B’rith Anti-Defamation Commission (ADC) chair Dvir Abramovich has condemned the posters, carrying the name of neo-Nazi organisation Antipodean Resistance, which describes itself online as “a National Socialist youth organisation in Australia, primarily based in Melbourne”.

The posters, which depict new arrivals in Australia as insects, have drawn the ADC’s condemnation, with Abramovich stating that “it is worrying that young people have been exposed to such a hateful and despicable message which violates the campus climate that is welcoming and respectful for all.

“We would not be surprised if those targeted by such disturbing speech will feel unsafe and scared.

“It reminds us that virulent expressions of extremism and bigotry against immigrants and minorities are alive and well, and that white supremacists are continuously trying to spread intolerance and recruit members to their warped cause.

“Such behaviour poses a threat to the values of inclusivity and respect we as a community cherish, and we must do all in our power to reject this abhorrent rhetoric whenever and wherever it surfaces.”