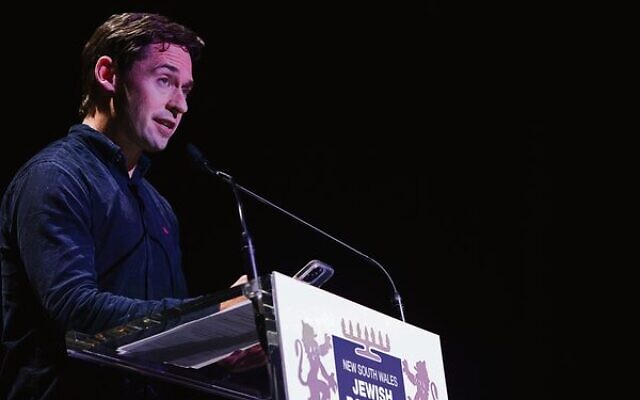 INVESTIGATIVE journalist Nick McKenzie was the keynote speaker as over 400 members of the community gathered to commemorate the 84th anniversary of Kristallnacht at Moriah College last week.

The theme of the event was “Nazis Uncovered” and McKenzie, who revealed the inner workings of Australia’s neo-Nazi cells, reminded the audience that hidden hatred still exists.

“The undercover was to wear a hidden camera and to capture the group at work. It was obviously an intensely dangerous job and to be frank, even with all the security checks and balances we put into place, not one I would ever repeat. But the results were spectacular.”

McKenzie’s investigation was featured on 60 Minutes and in the Stan documentary Revealed: Amongst Us – Neo Nazi Australia, which he said led to a brief reduction in the membership of the NSN.

“If these men are looking for belonging, perhaps we can give it to them through other ways,” McKenzie said.

“And if they are ignorant, can our schools get to them earlier and teach them about the dangers of conspiracy and antisemitism? My Jewish mother asked me not to do this program. It was too painful for her and she was scared, but I told her Australians needed to know that neo-Nazis are indeed still among us.

“For me the fight is both professional and personal and events like this remind us all why we must keep fighting.”

NSW Jewish Board of Deputies (JBD) president David Ossip said, “We acknowledge the growth in neo-Nazism in our backyard and the rise of antisemitism – both casual and overt – here in Australia. To this, we say that we will not be passive and we will not be silent.”

“The result? The Wollongong and broader NSW community now have the answers they deserve about this man’s Nazi past, bringing further opportunities to educate the community about the horrors of the Holocaust,” Bark said.

Bark also presented a framed and signed copy of the legislation banning the public display of Nazi symbols to the Sydney Jewish Museum.