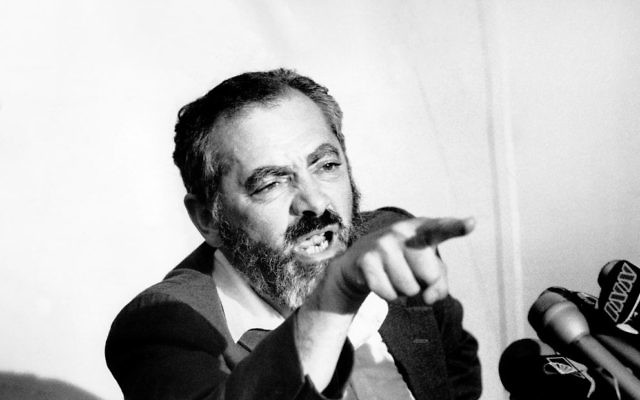 KAHANISM with all its despicable racism and hatred, has resurfaced from the gutters of Israeli politics into the mainstream of pre-election debate.

Benjamin Netanyahu’s over-arching desperation to cling to power, and the ethical corruption of those religious Zionists who’ve lost their way, have combined in unholy alliance.

The deal between Netanyahu and Habayit Hayehudi (Jewish Home) which elevated Otzma Yehudit ( Jewish Power) represents a disturbing threat not only to Israel, but for the Jewish world. Or at least for those in the Jewish world who care about Israel’s inner security and moral compass.

Yes, it’ll be Israeli voters who’ll ultimately decide whether Netanyahu’s Faustian deal is merely a passing aberration or something more sinister. But this is one of those watershed moments when, if the notion of “Jewish peoplehood” still means anything more than a slogan, Diaspora Jews, especially pro-Israel activists, may make a difference.

And when, in any event, they’re obligated to speak out. As many have already begun to do. In Australia, the United Kingdom, and other Jewish communities. Most notably, however, in the United States.

Witness the immediate condemnations by AIPAC and the American Jewish Committee (AJC), the two leading pro-Israel advocacy bodies. Otzma Yehudit’s views were “racist and reprehensible”, they said, and did not reflect “the core values that are the very foundation of the State of Israel”. As AIPAC and the AJC very rarely intervene in Israeli elections, their views made big news in Israel, creating a “sonic boom”, as one commentator described it.

Yet although the re-emergence of Kahanism happened in an over-heated election campaign, the issues raised, for Israelis and Diaspora Jews alike, go far beyond politics, parties, and Israel’s dysfunctional electoral system which, in some ways, must share the blame with Netanyahu and those seeking to play it for narrow advantage, contrary to the national interest.

The issues which matter beyond politics, and why they’re not solely the concern of Israeli voters but matter to Jews and Judaism, have been eloquently expressed by Yossi Klein Halevi, one of Israel’s leading authors. In response to the Netanyahu/Bayit/ Otzma deal, Halevi’s written a definitive essay, The Desecration of Israel, which deserves the widest circulation.

About the Jewish Home party “who voted to join with Otzma Yehudit and the rabbis who gave their hechsher, their seal of kosher approval,” Halevi writes that “ Kahane has posthumously become one of them. The party of the faithful has committed an historic act of Hillul Hashem.”

As for Netanyahu, Halevi is unsparing. “ He has written himself into the annals of our ancient kings whose moral corruption undermined the spiritual immune system of the nation. Netanyahu has committed the secular equivalent of Hillul Hashem: He has desecrated the name of Israel.”

What adds a distinctive personal dimension to Halevi’s denunciations is his youthful admiration for Meir Kahane, and his membership of the Jewish Defense League (JDL) which Kahane founded in New York in the 1960s. But since breaking with Kahane after the American rabbi came to Israel in the early 1970s, and began his campaign to expel Palestinians, Halevi has watched Kahanism develop in Israel with “the small comfort” that “the abomination was being confined to the fringes”.

According to Halevi, however, despite its fringe status Kahanism is little understood. It’s not merely a political movement, an ideology, but in its essence it’s “a theology that sanctifies hatred and vengeance in an apocalyptic messianic vision”.

Which is why the way rabbis respond to Kahanism’s role in Israeli public life, especially rabbis within the Orthodox tradition inside and outside Israel, now matters profoundly. Reform, Conservative, and Reconstructionist rabbis have already expressed their condemnations. Commendable, but no surprise.

And in Australia, Rabbi James Kennard has written of “the sad day when [Kahane’s] ideological descendants are brought back in from the cold…” and the “dying embers” of the National Religious Party identify with “unadulterated extremism and racism … Israel deserves better. The Jewish People deserves better”.

So far, however, Orthodox voices such as Lau’s and Kennard’s have been in the minority among their colleagues. But given the fragmented and divided religious Zionist electorate in Israel, and the impact that a widespread and powerful denunciation of Kahanism could have on the way it votes on April 9, the rabbis who care may well have it within their power to prevent a Hillul Hashem- and the Desecration of Israel.

SAM LIPSKI is CEO of the Pratt Foundation and a former editor of The AJN.