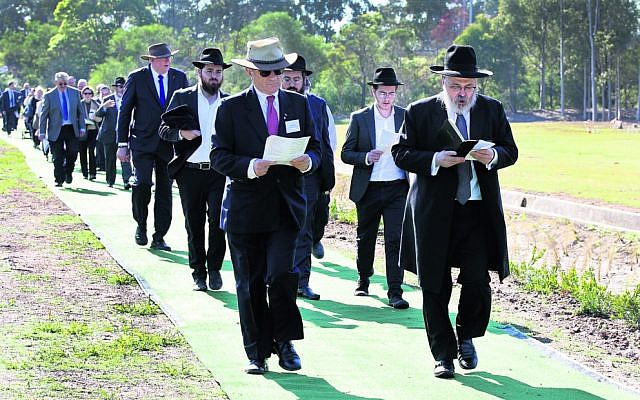 MORE than 70 per cent of the current Sydney Jewish community is expected to be buried in Sydney’s newest cemetery in Varroville.

With Jewish burial spots at Macquarie Cemetery set to run out this year, and only about five years’ worth of spots available at Rookwood Cemetery, the community will find a new home near Campbelltown after an announcement by the NSW Independent Planning Commission this week.

“We first brought this issue to the government’s attention in 2005 and we’re delighted with the approval,” David Knoll, who has been representing the Jewish community in discussions with the government, told The AJN.

“The first time there was a realistic prospect of this moving forward was last year under the Berejiklian government and she has made this possible.”

Acting NSW Jewish Board of Deputies president Isabelle Shapiro said this is a “great outcome for the community”, noting that it “will give the community cemetery space for next century”.

Shapiro thanked Knoll for his “tireless efforts” and the Sydney Chevra Kadisha.

“We thank the Independent Planning Commission for granting the approval and acknowledge the Catholic Metropolitan Cemeteries Trust (CMCT) for agreeing to provide urgently needed burial space to the Jewish community at an affordable price,” she said.

While the new cemetery will predominantly cater to members of the Catholic religion, it will also serve a number of faiths.

“We would also like to thank the CMCT for including the needs of the Jewish community in this development,” the Sydney Chevra Kadisha said, adding, “We are grateful to the NSW Jewish Board of Deputies for their ongoing work to provide for future burials for the Jewish community.”

The Sydney Beth Din’s Rabbi Yehoram Ulman, who consecrated the new section at Rookwood last year, said, “Any provision for halachic burial is an important achievement within the community.

“We hope and pray that very few people have to use any cemetery as we pray for longevity and health, but for those who need it is important it is there.

“We commend David Knoll and JBOD for their efforts and will work together with David to organise a consecration when it is appropriate.”

The location of the new cemetery is a farm estate dating back to 1810 that played a significant role in the horticultural development of NSW in colonial times. The heritage-listed property also contains a privately owned homestead dating back to 1858 and several outbuildings.

Due to the historical significance of the site, the DA was being contested and its approval comes after then NSW planning minister Anthony Roberts took it out of Campbelltown City Council’s hands in mid-2018.

The AJN understands the CMCT asked the minister to intervene due to delays in the council’s deliberations.

Roberts intervened at the same time in the DA process for a cemetery proposal at Wallacia, near Penrith, and the two applications were being considered simultaneously. However, the Wallacia DA was rejected last Friday.

The planning commission said on Monday that the Varroville DA was in the public interest because it addressed a need identified in Cemeteries and Crematoria NSW’s November 2017 Metropolitan Sydney Cemetery Capacity report.

It said potential impacts to European heritage values, including the Varroville Homestead and the environment, “have been minimised through site design and layout and are likely to result in positive and improved outcome and management strategy for the surrounding landscape and outbuildings”.

But Jacqui Kirkby, who owns Varroville Homestead with her husband Peter Gibbs, told the ABC on Tuesday the cemetery would “totally engulf” their block.

“Who puts a cemetery around a privately owned state heritage-listed property?” she said.