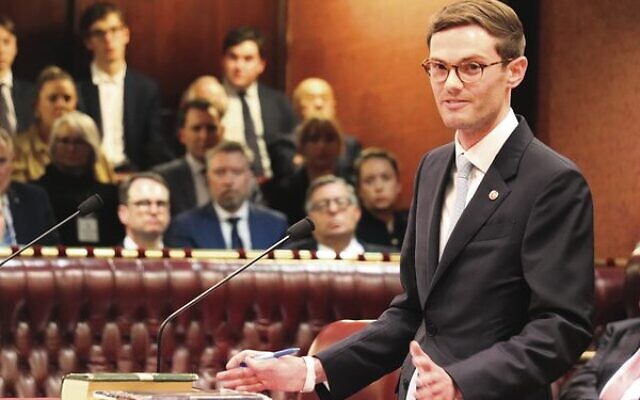 Chris Rath told Parliament he will always support Israel and the Jewish community.

CHRIS Rath used his inaugural private members’ speech to tell state Parliament that he will always support Israel and “stand with the Jewish community of New South Wales”.

The new Member of the Legislative Council made a special mention of the Jewish Board of Deputies (JBD) as his speech coincided with last week’s Yom Ha’atzmaut cocktail function.

“There was also a celebration of Israel’s 74th Independence Day being held, hosted by my good friends Darren Bark and Lesli Berger, the CEO and the president of the NSW Jewish Board of Deputies,” Rath said.

“I am disappointed that I missed that amazing function. It is a highlight in my calendar and I have attended every year for probably a decade. Today I use my first private member’s statement in this place to demonstrate my unwavering support for the State of Israel and its right to defend itself as the only truly free and truly democratic nation in the region. I also commit to doing everything I can to support the Jewish community and to combat antisemitism.”

“I also note the continued attack on Sydney’s Jewish community by the BDS movement, which has continually sought to wedge our society and reject notions of peaceful Israel-Palestine coexistence,” Rath said.

“Earlier this year we witnessed an attempt by the BDS movement to culturally exclude Israel from the Sydney Festival. This was an abhorrent affront on one of Australia’s greatest strengths: a multicultural society. To target an arts festival demonstrates the low depths that the BDS movement is willing to sink to in their vehemently political anti-Israel campaign.”

Rath said he stands with the Jewish community against antisemitism and he went on to question independent candidate Allegra Spender for allowing a “prominent anti-Israel activist” to be involved in her federal election campaign.

“An individual who aggressively furthered the claims of Israel being an apartheid state and propagated the plan to boycott the Sydney Festival,” Rath said.

“If we are truly committed to a multicultural society, one which values all cultures and rejects racial vilification, then I sincerely hope that members of this House will not be among those who remain silent.”