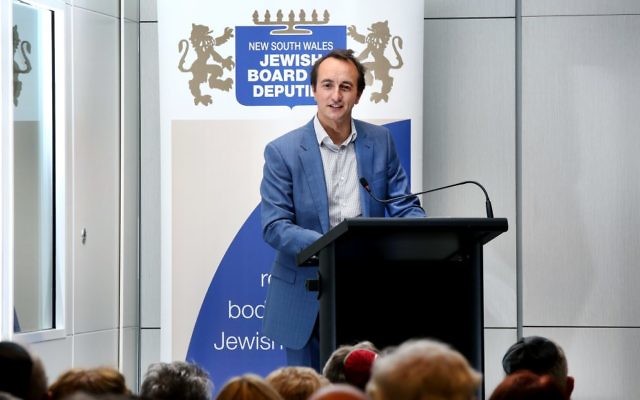 AUSTRALIA’S former ambassador to Israel Dave Sharma said in his first major address since returning to Australia that there may be no solution in the current climate to the Israeli–Palestinian conflict.

“There is a degree of stability in the status quo,” said Sharma, who lived in Israel for four years.

“The relationship between the Israeli and the Palestinian people might be as good as it can be for now, until broad political change in the region takes place and the Arab world strengthens.”

He said that he still supports a two-state solution but that may not be possible until a new generation of Palestinian people come forward who are willing to accept Israel as a sovereign nation.

He said however, that the Israeli–Arab conflict is not the defining fault line of the region.

“The big story about what is happening in the Middle East right now is the crumbling of the creation of the nation-state system.”

Addressing the NSW Jewish Board of Deputies on Tuesday night, Sharma said that people of the nation-states have been failed by their political leadership and Israel is not the principal cause or a relevant factor to those states’ failures.

On why Israel is the subject of so much condemnation, Sharma said he was struck by the amount of people who happily profess utter ignorance on a number of issues, but somehow feel empowered to possess an unimpeachable moral clarity on the Israeli–Palestinian issue.

“I’ve always found that puzzling,” he said. “I don’t understand why people pick on this issue.

“Their views can be so firmly held, often without being there of course, and they can be so opposed to hearing contrary points of view.”

Recalling his time in the country, Sharma spoke about running to bomb shelters during wars and the panic that spread across Israel as a result of the conflict across the northern border.

“Syria had large stockpiles of chemical weapons and people in Israel were expecting that if the US hit Syria hard, that Syria might respond by attacking Israel.”

“We had to scramble and buy some military off-the-shelf gas masks from the UK … and we all had to be trained on how to use chemical weapons masks, how to fit them and when to use them.”