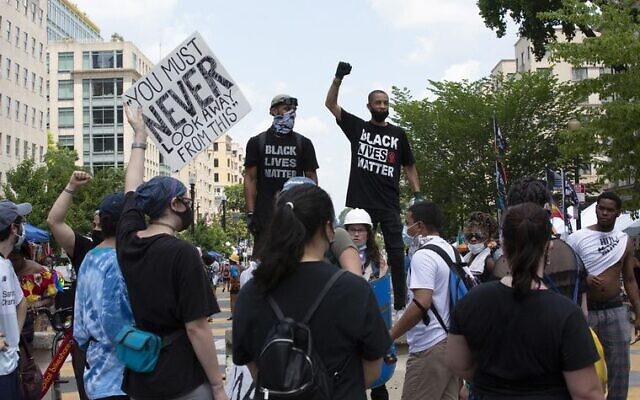 THE death of unarmed black man George Floyd at the hands of a Minneapolis police officer was a flashpoint for US race relations, setting off massive protests that spread around the world, including Australia, and awakening sympathies of people of all ethnicities, including Diaspora Jewry.

The demonstrations endorsed the simple messages that black lives matter, that the blood of minorities is not cheap and the injustices they face, past and present, must be addressed much more vigorously.

The local protests are relevant to the situation here, which has its own history.

But Black Lives Matter (BLM), the group that organises protests and purports to represent these protesters, backs wide-ranging political demands that many would not even know of, let alone endorse.

Of special concern to world Jewry are calls to end US military support for Israel, which it terms an “apartheid” state that is perpetrating “genocide … against the Palestinian people”, among other things.

Activists claim that Israel trained US cops to use deadly strangleholds – an allegation so transparently malicious and fabricated that the UK Labour party leader Keir Starmer sacked its education spokeswoman Rebecca Long-Bailey for retweeting it. Yet BLM’s leaders have been silent.

There are more examples. It’s no wonder Jewish organisations are wary of BLM.

When informed that several major Jewish organisations would continue to seek ways to support the black community but withhold direct support for the BLM movement, a BLM leader, Rachel Gilmer, told Haaretz in 2016, “I don’t think it’s a loss” to the BLM movement. “It’s just made it clear that they weren’t real allies.”

As a New York native educated in a public school district where I was the only Jewish pupil and one of literally a handful of white youths out of thousands of students, the tension between BLM and Jews is palpable and is played out every day on my Facebook feed. But it’s a fake dichotomy. There is no need to choose between fighting the racial injustice addressed by BLM and supporting Israel.

Nor should the phenomenon of black antisemitism be used as an excuse to remain on the sidelines. There are, after all, many alternatives to BLM among the American black community’s core institutions – groups with far less tolerance for antisemitism and Israel-bashing.

These pathways are due in no small part to historic partnerships between black and Jewish activists which reached a peak during the American civil rights era.

The depth of cooperation between black and Jewish organisations during that time would be almost impossible to overstate, with Jews playing a major role in some of the successes of the era.

While black and Jewish relations cooled from the mid-1970s onwards, some strong ties endured, while others revived. Nowhere are these ties more evident than at America’s iconic black civil rights organisation, the National Association for the Advancement of Colored People – better known as the NAACP.

Founded in 1909 by a group of visionary black, Jewish and white social reformers, and continuing to feature a rabbi on its national board today, the NAACP is aimed at correcting injustices against black people in the context of a universal mission. It is similar in many ways to the Jewish Anti-Defamation League civil rights organisation, and the two organisations routinely work side by side.

At crucial moments in history, the NAACP actually went beyond simple support for Zionism to actually lobby for Israel’s creation.

In 1972, after the NAACP pulled out of that year’s National Black Political Convention over anti-Israel resolutions that had been passed there, then-NAACP assistant executive director Dr John Morsell noted that, in 1947, then-NAACP executive secretary Walter White “lobbied vigorously for [the UN’s Palestine] partition [plan] with the delegates from Ethiopia, Haiti and Liberia, and succeeded in influencing two affirmative votes and one abstention”.

While NAACP’s support for Israel has become more complex over the years, it refuses to cave in to political pressure to make the Jewish State a wedge issue. In 2017, then-NAACP president Cornell Brooks tweeted, “On the issue of Palestine and Israel … we don’t necessary [sic] need a consensus but we do need to keep talking.”

The NAACP has been quick to root out any antisemitism in its ranks, and seeks out black-Jewish dialogue in communities where antisemitic attacks have occurred to reduce antisemitism at its source.

In November 2018, former US attorney-general Eric Holder was the keynote speaker at a major NAACP fundraiser in South Carolina held under the theme of “saluting our Jewish and black founders”.

Holder called to “resist those who would try to put asunder the historic Jewish/black alliance that has meant so much in the fight for equality for both groups”.

Many activists riding on BLM’s coat-tails would surely like nothing more than to prevent Jews from expressing their solidarity – like Muslim social justice organisation MPower leader Linda Sarsour, who held a civil rights rally to commemorate the slavery-ending holiday Juneteenth, with an invitation to all “except cops and Zionists”.

Jews shouldn’t let these elements deter us from adding our voices to the conversation. In New York’s Crown Heights – the scene of black riots against Jews in 1991 that took the life of Melbourne student Yankel Rosenbaum – a Jewish organiser of a black solidarity rally told The Forward last month, “If an agent of the justice system can murder a person in cold blood that doesn’t just call out as a human issue, as an American issue, to me that calls out as a halachic issue, a Jewish law issue,” he said. “It should call out to every Jew.”

Ahron Shapiro is a senior policy analyst at the Australia/Israel & Jewish Affairs Council.