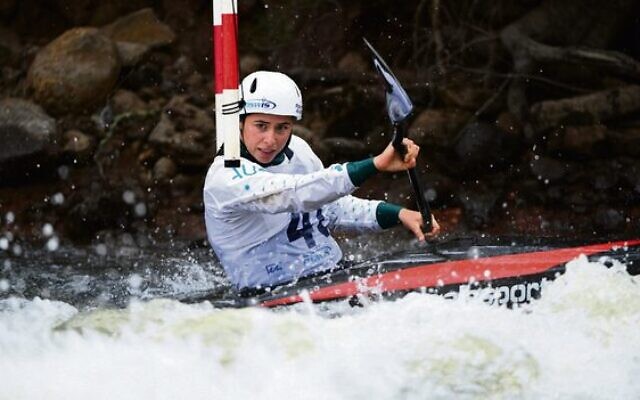 The 25-year-old Sydneysider kept the national women’s single canoe (C1) and single kayak (K1) titles within the family, by qualifying for, and winning, both finals.

And she was thrilled not just with those wins, but to be back racing again in the short domestic season, with her home course in Penrith in Sydney’s west, out of action for most of the summer due to flooding.

“It’s been really great being in Tassie, paddling on the Bradys course – it’s just so fun, and it’s been a good experience for us [NSW-based paddlers] as well,” the younger Fox sibling said.

“With no whitewater [course in Sydney available], it is definitely impacting our [home] season, and our ability to train and prepare.

“Being able to come here has just been the best thing for us, to be able to paddle whitewater again has been amazing, despite the cold.

“A few runs [were] in below five degrees [temperatures], but it’s good resilience training, and character building!”

In the C1 final, Fox (127.07 seconds) was accurate and lighting fast when it mattered most, beating runner-up, Tasmanian Demelza Wall – who accrued four 2-second penalties for clipping gates – by a comfortable 29.73 seconds, while Tasmanian Sophie Wilson came third.

The K1 final was a closer contest featuring nine paddlers, with Fox completing an error-free run in 118.83 seconds, to clip runner-up Wilson, who had a 4-second penalty, by 17.28 seconds, while Georgia Rankin from NSW claimed bronze.

Both Fox sisters will now turn their attention to the international season, for the World Cup Series and World Championships, to be held later this year in Europe.