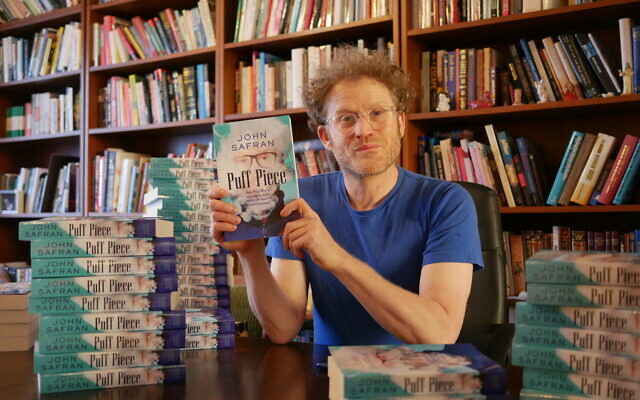 The biggest news on Twitter when John Safran was writing Puff Piece was the denouncement of Martha Stewart for endorsing slavery, not the fact that Philip Morris, the world’s largest cigarette company, was planning to slip past the menthol cigarette ban. It’s something that confused and intrigued the satirist, documentary maker and author. Why was the world turning a blind eye?

Safran’s obsession with words and language can be traced back to his Yeshivah College days in Melbourne, where he was sent by his “culturally Jewish, not religious, Bundist” parents to set his life back on track after he admits he slacked off at the beginning of high school. According to Safran, he was “the least religious kid in the most religious school in Melbourne”.

But he has fond memories of his time at Yeshivah College, telling The AJN that he learnt about the power of language while there. “We can bend reality with language,” he said. “After all, God created the world by whispering words.”

The self-confessed scrabble buff admits that he buys the Scrabble Dictionary the day it is released.

And it’s the manipulation of words and language that Safran has such a problem with.

Puff Piece explores how the tobacco industry is handling various bans around the world on cigarettes and smoking by simply changing the language. Fifteen years ago, governments began to banish cigarettes from pubs. Since then, smoking bans have become more widespread, with some companies refusing to hire workers who smoke. Last year, on the eve of World No Tobacco Day, countries throughout Europe banned menthol cigarettes completely.

Apparently, this wasn’t a problem for Philip Morris. They announced they were going to stop selling menthol cigarettes and start selling a tobacco heating system called IQOS. Simply pop in a HeatStick and away you go.

The problem is that a HeatStick is tobacco rolled in paper with a filter at the end. As Safran says in the book: “You know, like a cigarette.” (You can almost hear the irony in Safran’s voice when you read that line).

According to Safran, the tobacco giant is a master manipulator of the English language, hoodwinking us all into believing it’s something different.

As Safran told The AJN, he kept finding tricky things Philip Morris had said. “Even after I printed the book, I realised there was an extra level to their ingenious way of manipulating language,” said Safran, explaining that they reword everything, even smoke into aerosol.

“We’re living in a time where people are redefining words and meanings in all sorts of ways,” he continued. “It’s such a powerful thing to do if you pull it off. And in the high-stakes, life and death situation, Philip Morris has pulled it off. They reworded things, and they survived. They lived to fight another day and it’s all through changing what words mean.”

Safran discovers other linguistic problems throughout the book. Another example is people changing ‘Jew’ to ‘white’. “Jews aren’t Jews, Jews are white,” Safran explained. “Because if we’re white people, suddenly if you’re attacking a Jew, it doesn’t have the heat of attacking a Jew. And then it goes further to become, how can this white person say they experience antisemitism, because they’re not Jewish, they’re white.”

Again, it’s the manipulation of words, in all areas of life, that Safran grapples with throughout Puff Piece.

“I want people to hopefully realise that we can easily be taken for suckers if we allow powerful people, or people of influence, to reword things,” Safran said.

Ever the comedian, he finished by saying, “Also, I hope they laugh and stuff.”