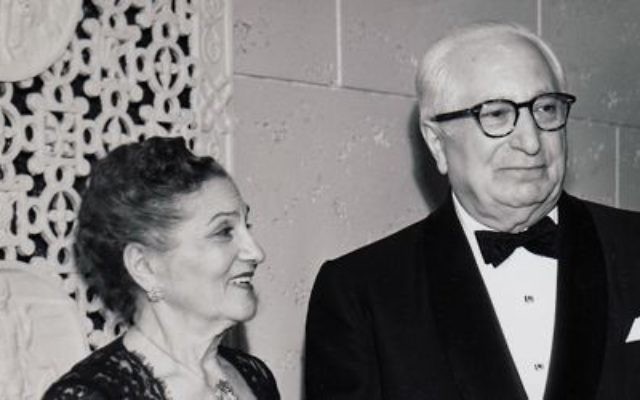 When Alicia Mayer learnt of a book which charged her great-uncle, film icon Louis B. Mayer, with being – in her words – “practically Hitler’s man in Hollywood”, she had flashes of her “family’s legacy in tatters”. Then she dug deeper.

IT was June 25 and I was catching up on book reviews when Ben Urwand came crashing into my life. As a book editor and American expat in Sydney, I did what I’ve done thousands of times before and clicked on the link to the New York Times book page – it’s my daily check on what’s new and notable in the industry. But this visit would turn my life upside down.

In her book review, “Scholar Asserts That Hollywood Avidly Aided Nazis,” staff editor Jennifer Schuessler gushed about a new book from Harvard University Press, The Collaboration: Hollywood’s Pact with Hitler written by a junior Harvard fellow and Jewish-Australian, Ben Urwand. The book’s central premise was that to retain the German film market, the Jewish moguls “not only acquiesced to Nazi censorship but also actively and enthusiastically cooperated with that regime’s global propaganda effort.”

Furthermore, according to Urwand, not only was my great-uncle, Louis B. Mayer, implicated along with the other studio heads, he was chief “shylock” – the most craven of them all; practically Hitler’s man in Hollywood. By this stage, the blood had drained from my face, so I wasn’t keen to click on a link leading to an earlier article by David Mikics, writing in Tablet, an online magazine that styles itself as “a new read on Jewish life”.

I remember thinking: oh please no, not the Jewish press. This must be true…

As I clicked on the link, anything could have been going on around me. I have three children so the house is never quiet, but there was only one thing in front of me: my family’s legacy in tatters.

Mikics, who did not reveal he is also published by Harvard, barely containing his anger, finished with “Hollywood could have helped awaken the world to the looming danger of Nazism, but instead the Jewish dream-makers cast their lot with the world’s – and the Jews’ – greatest enemy.”

As I read this, I decided if the claims were true I would shutter my blog, HollywoodEssays.com, where I’ve celebrated my family’s contribution to the film business and Jewish causes. I would close my Twitter account with loyal followers, including classic Hollywood fanatics, prominent writers and journalists, and notable film people. There would simply be nothing to celebrate, write about or tweet about. There could only be gut-wrenching shame.

In a haze, I went back to Schuessler’s article and then googled the film scholars who had also commented, including history professor, Steven J. Ross of University of Southern California (USC) and Thomas Doherty, a film scholar from Brandeis University, both of whom had profoundly disagreed with Urwand. In fact, Doherty had just published his own book on the topic, Hollywood and Hitler: 1933-1939.

I wrote to Ross and Doherty. I wrote to bestselling author and film historian and biographer, Scott Eyman, who had written Lion of Hollywood: The Life and Legend of Louis B. Mayer. At 596 pages, it is the definitive biography of my great-uncle with hundreds of research notes; surely Eyman would know if Ben Urwand’s claims were true. I wrote to my cousin, Daniel Mayer Selznick, the son of LB’s daughter, Broadway producer Irene Mayer and movie producer David O. Selznick.

I did what any Jewish woman would do: put the word out, pull in some answers, and try to make quick sense of the mishegas. It was exactly what my great-grandmother, Ida Mayer Cummings, did for decades – she phoned and wrote thousands of letters to everyone and anyone in an effort to raise money for the Jewish Home for the Ageing in Los Angeles. Ida and her younger brother, Louis, were very close and birds of a feather with the same legendary chutzpah. Bob Hope, who emceed her annual gala fundraising event for years, once said of her, “she is the only woman I know who can reach down a phone and grab a man by his lapels.”

And so I reached out from Sydney to America and sought the truth.

I cannot begin to describe the relief I felt when the emails began to flow in, all with basically the same messages: Urwand had dramatically overstated his case; he didn’t understand the fundamentals of the film biz and Hollywood; or even that the German market was not a lucrative money-spinner. Urwand had downplayed crucial political and social context, entirely neglecting that the Jewish moguls were, well, Jewish, and immigrants who had fled hostility and violence against Jews, whether it had been Germany, or in our case, the Ukraine. As such, these men operated within certain constraints (real and self-imposed) that simply cannot be understood by looking down the spyglass from the wrong end. The Nazis were not the Nazis as we know them now; no one had any inkling of what was to come. And also, as Jews during this time, had they met and plotted and planned (many lived on the same street, Palisades Beach Road, at the time) they would not have documented any of this.

Yet, within days of the New York Times and Tablet reviews, and for several weeks that followed, America and Europe embraced The Collaboration.

Urwand was treated like a rock star with television interviews and personal appearances, including at Jewish literary events and Holocaust related institutions, such as the Museum of Tolerance in New York. Urwand was the darling of the mainstream and Jewish media around the world. The Collaboration rocketed up the bestseller list to number one.

Then, slowly at first, the rebuttals came. Then they became a torrent. First, appropriately so, was Thomas Doherty’s piece in The Hollywood Reporter where he called the book “slanderous and ahistorical.”

Then in AFI’s online news mag, regarding the sickening claims made about my own great-uncle, film historian Mike Greco said, “Urwand writes unaware or indifferent to the terrible libel he is committing.”

Two weeks later in The New Yorker, the legendary film historian and critic, David Denby slammed The Collaboration and actually asked why Harvard had published the book at all.

Now, at last count, there are 19 major rebuttals and critical articles linked on my website, many of which provide their own history lesson in order to correct the errors in Urwand’s book. In fact, professor Jeanine Basinger, an esteemed film scholar from Wesleyan University, writing in The Wall Street Journal, called The Collaboration “a film historian’s nightmare.”

But why were so many, including fellow Jews and the Jewish press, so instantly willing to accept the heinous claims Urwand made? The answer is not pretty. There is anti-Semitism, of course, the power of the Harvard brand, shoddy journalism but also the belief that if one Jew slams another Jew, Jewishness is all we need to know – no scrutiny is needed.

As Urwand’s posthumous take down of other Jews has proven to be wrong, I have kept up my letter writing and asked the organisers of Jewish events to cancel Urwand’s talks. None have chosen to do so. And only one, a book festival in Atlanta, has ensured that Urwand will be questioned by an independent film scholar. But why is any organisation, let alone Jewish organisations, willing to give this author a platform?

I will leave you with this thought:

When it was finally going pear-shaped for The Collaboration, who did Harvard blame? The author, now discredited by relentless rebuttals? The Berkeley professors where Urwand was awarded a PhD for his thesis (which later became his book) but who have not supported him publicly? The publicists who chose to denigrate Doherty’s book to help promote Urwand’s and who touted his Jewish background and grandparents?

No, Harvard blamed me – by name.

Alicia Mayer is a book editor in Sydney specialising in governance. She is also an early and classic Hollywood film historian, writer and blogger. Her book about the Mayer family of Hollywood, with an introduction by Leonard Maltin, is due out in 2014.

Pictured is a rare photo of Louis B Mayer with his sister Ida Mayer Cummings.