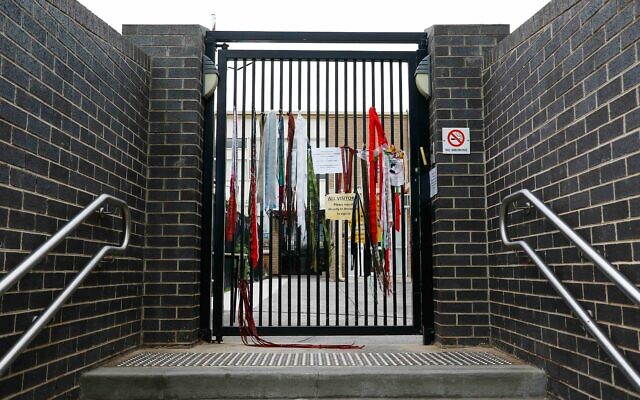 Ribbons on the gate of the Adass Israel School this week. Photo: Peter Haskin

“AFTER many years of legal battle, it is our moral duty to allow the Australian legal authorities to put [Malka Leifer] on trial.”

These were the long-awaited words uttered by Israel’s Justice Minister Avi Nissenkorn last week after he officially signed the extradition order for the former Adass Israel School principal to return to Victoria to face 74 charges of child sexual abuse.

Last Tuesday night (Australian time), Leifer’s lawyers had lost their last-ditch appeal against a ruling that the alleged abuser be returned to Australia.

Following the verdict, Nissenkorn had vowed to sign the extradition order “without delay”, noting, “It is time to provide justice to Leifer’s victims.”

Australian Jewry and Leifer’s accusers – sisters Dassi Erlich, Nicole Meyer and Elly Sapper –woke last Thursday morning to news that the paperwork had been signed and Israel had 60 days to place Leifer on a plane.

Leifer’s lawyer Nick Kaufman said his client would not challenge the decision, but would seek to serve her sentence in Israel if she is convicted in Australia.

Accusing Nissenkorn of acting hastily, he said, “The minister of justice was meant to exercise his discretion in a considered manner after hearing submissions from the defence and not impetuously in a flagrant attempt to appeal to popular sentiment.”

Welcoming the extradition signing, Erlich stated, “Now, it’s not about if – but when.”

Noting, “These are extremely serious allegations [against Leifer] which should be heard within the Victorian judicial system,” Australian Attorney-General Christian Porter said, “After many years, it now appears that is close to becoming a reality.”

Foreign Minister Marise Payne added, “My thoughts this morning remain with the alleged victims, including Dassi Erlich, Nicole Meyer, Elly Sapper, who have mounted a determined campaign to ensure that the allegations against Ms Leifer are heard by the Australian legal system.

“They have shown enormous patience and resolve. I hope these developments overnight give them confidence that this chapter in the long-running and difficult process is drawing to a close, and the charges against Malka Leifer can soon be heard in Australia.”

The ministers said Israeli and Australian authorities will work together to organise Leifer’s surrender to Australian police.

Last weekend, ribbons were tied to the gate of the Adass Israel School in Elsternwick as part of the Loud Fence movement, in support of victims and survivors of child sexual abuse.